The Man in the Sand Box 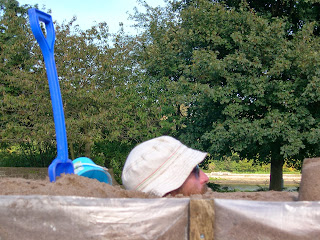 My last post was about the fact that Berwick film festival has now developed a 'fringe'. The open studios being held by several artists over this weekend could be considered to be part of this fringe, but as Berwick has had a thriving artistic community since well before the film festival got going, this might be getting things the wrong way round. 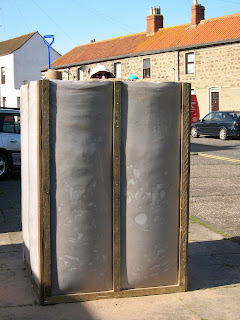 There is no secret about the fact that Matthew is extremely unhappy about the way he was treated by the new regime at Berwick Visual Arts. He lost his job as part of the transition to new funding arrangements and organisational structures, and did not, to put it mildly, take it well. I am not in a position to comment on the rights and wrongs of his non-employment, but most regular attenders at local art events would agree that the new Berwick Visual Arts seems to be generating a lot less art with a lot more money. As to the rumour that a 'Gateshead Mafia' is taking over the arts scene in Berwick, I could not possibly presume to speculate.

I had a bizarre conversation with Matthew while he stood in his giant sand-box. He had originally intended to remain silent throughout but the urge to explain the symbolism proved too strong. There was a reference to people 'burying their heads in the sand' about what is going on in the arts scene locally. He feels that he, his family and his career have been buried. Making people stand up to their necks in sand was used as a form of punishment or torture in some cultures and is familiar from the movies about the French Foreign Legion, and in staging this version of the practice he is expressing his sense of being tortured by the way he's been treated.

This is all good stuff and I really wish that more people had got to see Matthew's statement. I hope that this blog post  helps to spread the news to those who didn't make it over the bridge to Tweedmouth this weekend.