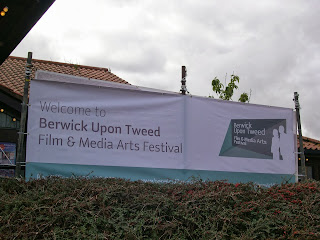 Once again I am in the middle of volunteering at Berwick Film and Media Arts Festival. Yesterday a chap from the local paper came and stuck a camera in my face while I was shivering outside one of the video installations in unusual historic buildings which are what makes this festival so special. If I end up featuring on the paper's website, I'll let you know.

I made a point of saying on camera that 'what the festival does for the town' is bring in a lot of upmarket tourists. We are constantly being told that this is what we need here, more visitors with deep pockets and discerning tastes, and the film festival delivers these in spades, but that doesn't stop a lot of the locals moaning about the amount of funding it gets. In actual fact, it is getting increasing amounts of commercial sponsorship, and if the local whingers put more effort into doing likewise and less into blaming everything that's wrong with the town on a supposedly uncaring county council, we'd all be better off. Anyway. 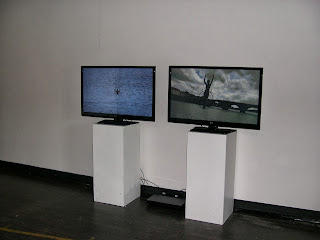 I am delighted that the theme of this year's festival is the cultural links between this area and the Nordic countries. The title chosen is North by Northeast, which in my view does not convey the subject matter very well, not least because we locals are always careful to describe the region as 'north-east England and south-east Scotland'. To me the real theme seems to be the idea that the peoples of the North Sea and North Atlantic Ocean form a kind of community, that the residents of northern Britain, Iceland, Norway, Sweden, Denmark and the Netherlands are a distinctive cultural zone.

I have written about this theme myself on this blog (here) so I am finding the festival programming a joy. The main publicity image (here) is taken from the video work shown in this photo. The Norwegian artist Sidsel Christensen filmed herself hanging on a hoop in a coastal landscape of Norway and then again in the estuary here in Berwick, each tine looking out across the North Sea towards the other location. This reminded me of once being told by a Danish woman that I was her next-door-neighbour, because she lives right on the coast of Denmark and I live right on the coast here in Berwick. I love this idea.
Posted by Elaine Housby