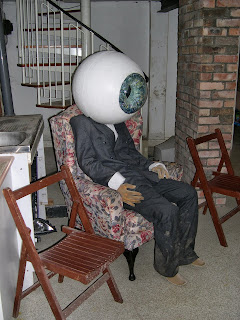 My last post was about Berwick Film and Media Arts Festival 2013, now in full swing. The festival is in its ninth year and is going from strength to strength. So much so that I am delighted to be able to report it has now developed its own Fringe.

I followed a fly-posted arrow through a car park to a disused basement in Quay Walls, and found a group of enterprising young locals had responded to the rejection of their submission by the festival selection committee in the best 'let's do the show right here' style. They were showing a short film about this character on the left. The highlight is when he is seen climbing from the inside of Berwick's famous town hall clock out onto the front elevation of the building, a scene they assured me was not computer generated but staged in dangerous physical reality. I asked if they were referencing the line in Orwell's 1984 about the clocks striking thirteen. They said No, but now I'd mentioned it, that was quite a good idea. 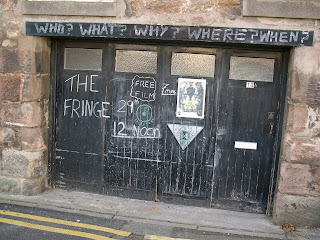 The other two rooms of the basement had been decorated as a cross between Churchill's underground war rooms and a noir version of one of the many vintage shops in the neighbouring street. I have no idea what any of it was trying to say, but I loved the vibe. It's a great antidote to the overdose of the heritage industry version of Berwick that we all suffer from. The film also featured a masked man writhing in the fetters of the 18th century prison cells. I think it's good to be reminded sometimes that a lot of this heritage was pretty unpleasant and we're well rid of it. 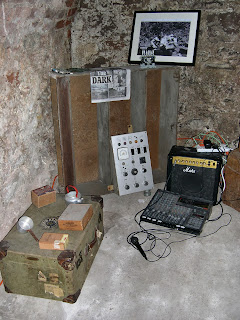 A number of more established local artists have seized the opportunity offered by the film festival's visitor traffic to hold 'open studio' days. There are many fine artists in Berwick. I have to admit that the great beauty of the town and its coastal setting is also a magnet to second-rate artists, but not as much so as some other picturesque parts of Northumberland.

Over the last couple of years there has been a change of funding regime in the visual arts scene in Berwick that has left a lot of bad feeling in its wake. So much so that one of the sights of the festival Fringe was an artist staging a dramatic protest about it. Look at my next blog post to find out more!
Posted by Elaine Housby