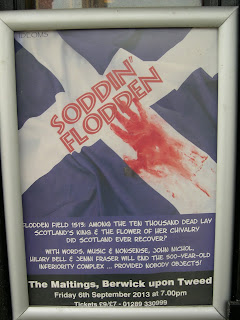 I love the title of this show taking place at the Berwick Maltings tonight. Not quite enough to actually go to see it, because I'm hard-up just now, but enough to borrow it for this blog post. 'Soddin' Flodden' just about sums up how I feel about the massively OTT celebrations of the 500th anniversary of the Battle of Flodden, which falls some time this month (don't know the exact date, don't care). I am going to come right out and confess that I find everything about this battle and its commemoration a crashing bore. If you want to learn about this battle, one of the most significant ever fought between England and Scotland, then two other excellent bloggers have written posts that will explain it all to you  - Berwick Time Lines and Northumberland's Past, both linked to in my sidebar.

I might be more interested in the 500th anniversary of Flodden if I had't been exhorted to get excited about it for what seems like years. I might also be more enthusiastic if I weren't so disgusted by the amount of money awarded by the Heritage Lottery Fund to 'Flodden 500'.  The current official figure is £877,000. I call that the thick end of a million quid. My determination never to buy a lottery ticket has been powerfully reinforced by this. As far as I know nobody has ever done any kind of cost-benefit analysis on whether the directly attributable increase in tourism will bring in, say, £878,000 to the local economy. 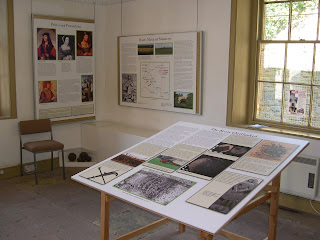 Despite my almost total lack of interest in Flodden, I am dutifully doing a regular stint stewarding the summer exhibition by Berwick Civic Society, which this year is about, guess what. Here it is. You can still see it every afternoon except Wednesdays until the end of September, in the old guardhouse on the Walls. But you may not have time after you've visited all of the places that together comprise the Flodden Eco Museum.

The term 'eco' here has no relation to environmental matters, it means it is a conceptual museum, consisting of already existing buildings and locations which all have a connection with a common theme, in this case the Battle of Flodden. It's an interesting idea as far as it goes, although in some cases the connection with the battle seems to have been a little forced by eager proprietors. It may also be a little too conceptual for some visitors. I've just had a conversation with one visitor to our exhibition in the Main Guard who had just come from touring the battlefield. He said that it was very interesting but it would be nice if there were a museum or somewhere to get a cup of tea. I tried to explain about the Eco Museum and his dominant reaction appeared to be that this didn't help him to get a cup of tea. Memo to all residents of Branxton (the village closest to the battlefield): where is your entrepreneurial spirit? Get that kettle on quick! Memo to the 'Flodden 500' folk: what have you spent all that money on?

The official publicity for Flodden 500 takes an almost painfully even-handed approach to the two combatant nations. The poster refers to a battle which 'shaped our nations', plural. The death of King James of Scotland and a great swathe of the country's elite seriously weakened Scotland as a nation and in this sense had long-term effects on the power balance between Scotland and England. One of the reasons Alex Salmond avoided holding the referendum on independence in 2013 is because of this anniversary of a battle Scotland lost disastrously. It's being held in 2014 soon after the anniversary of a battle Scotland won triumphantly, Bannockburn. I am not trying to score cheap political points here. Nobody in the English Borders takes a triumphalist pro-English line about these things. Rather, the epic human tragedy of Flodden has become part of Borders consciousness. Farmers in the area of the battle used to regularly plough up human bones, and there is no way of telling whether the bones are English or Scottish.

I have only once visited the battlefield, as a teenager. That was when it was just a field and had not  yet been invaded by 'interpretation boards'. I do recall it having a rather eery atmosphere. But back in the 1970s nobody made so much fuss about it all.
Posted by Elaine Housby