The Church of Scotland in England 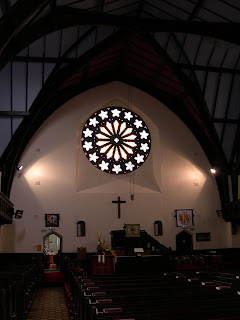 This is the interior of St Andrew's Church in Berwick. I visited it last weekend as part of the Heritage Open Doors event, an annual national event in England when buildings that are usually not open to the public let anybody come in for a couple of days. I have already written a post about the Anglican church in Berwick (here) so I thought I'd redress the denominational balance a little and write about the Presbyterian church. It is not nearly as old as the Anglican one, it is a 19th century building, which is quite modern by the standards of British churches, but it is much more attractive inside than most of the Anglican churches that mushroomed in the 19th century. It has a spacious and airy feel, some elegant wooden beams and some lovely stained glass windows. The picture below shows a modern window of St Cuthbert. 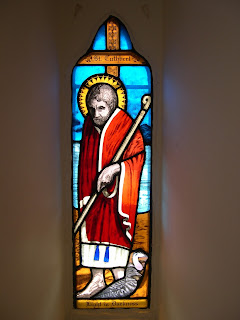 In England the Presbyterian church combined with the Congregationalist church in 1971 to form the United Reformed Church. St Andrew's in Berwick however was so opposed to this that it withdrew from union with the Presbyterian Church in England at that time and joined up with the Church of Scotland. The national church of Scotland is Presbyterian. This choice by St Andrew's was not a special arrangement just because it's on the border, there are apparently Church of Scotland churches all over the world. But in Berwick it does rather come across as making a point. It is very noticeable that Berwick residents of English ancestry and/or loyalties attend the Church of England, while those of Scottish ancestry and/or loyalties attend the Church of Scotland. Since these two churches are right next to each other, the impression is even more marked.

The (Scottish) man who showed me around St Andrew's remarked with a mischievous gleam in his eye that they do get English people attending their services, of course, but usually by mistake. This is probably because the Scottish church is accessible directly from the town's main car park, while to reach the English church one has to negotiate a gate and a path through the graveyard. The thing that unites all worshippers in Berwick is outrage at the over-zealous enforcement of the rules of the said car park. Both Anglicans and Presbyterians regularly emerge from services to have their prayerful mood shattered by finding a fine for parking without payment outside permitted hours slapped on their windscreens. Letters to the local press have denounced this as part of the persecution of Christians in modern Britain.

The different religious traditions of England and Scotland are one more aspect of the cultural differences between the two nations. The Church of Scotland has no bishops and local congregations elect their own 'elders' to run their affairs. This creates a culture of participation and egalitarianism which feeds into other aspects of the national life. The Church of England has the Queen at the top, followed by the Archbishop of Canterbury, and then down through a layer of bishops and then a layer of parish priests to the ordinary person in the pew, who does what they're told by higher authority. Not, of course, that a very high proportion of the population of either England or Scotland go to church at all these days, but centuries of religious culture leave their mark. And the fact that religious affiliation still expresses some deep sense of national identity is surely something to ponder when considering the future of the Borders.