By Bus Round the Borders 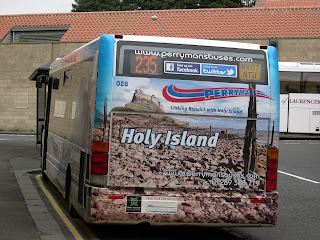 I've been wanting for some time to do a post about our local bus services, but how could I make a photo of a bus look interesting? Then I spotted this bus a few days ago waiting at the nearest thing Berwick has to a bus station. Which isn't very near. They knocked down the bus station years ago and filled in the gap with a couple of new shops, one of which is now empty and adding to the air of dereliction in the high street about which there is so much local hand-wringing. You see, in the long run it would have been better to put your trust in the public sector. Anyway.

This bus has been extravagantly decorated by Perrymans, a small independent bus company that runs many services in the Borders, to advertise the fact that it is possible to travel to Holy Island and back with them. I said possible, I didn't say easy. The Northumbrian island of Lindisfarne, always referred to locally as Holy Island, is connected to the mainland by a causeway which is covered by the sea at high tide, so it can only be reached by road for about half the day. The tides, of course, shift around the clock by about an hour a day. So imagine trying to organise a bus service around that. The timetable of the bus from Berwick to Holy Island is of mind-bending complexity. There are, in fact, seven timetables, lettered A to G. This is combined with a schedule of dates which tells you which of these timetables will be operational on any particular day. Having established the date on which you wish to travel and the tide-dictated time that the bus will leave, you then have to work out how long you will be on the island before the return service shows up, as this varies from day to day, and how best to pace yourself to fill the time. On some days you will have seen all the attractions of this very small island in great detail and still have time to consume a large pile of crab sandwiches (a local speciality) to stave off the hunger pangs while you wait.

The other special problem for the bus operators round here is, of course, the fact that many of their services cross the border. We are all trying not to think about what might happen if an independent Scotland ever decided to impose passport controls at the border. For the time being the biggest problem is created by the fact that the passes for free bus travel granted to English folk of pensionable age are only valid within England. Strictly speaking their holders become liable to pay the full fare the moment the bus passes the 'Welcome to Scotland' sign at Lamberton. However, Scottish Borders Council generously pays a subsidy to the bus operators to cover the difference, permitting retired shoppers, tourists and even a few older workers to travel all the way to Eyemouth, a whole five miles or so north of the border, for free. There are also, thanks to some agitation by the local MP, special arrangements in place to permit retired people to travel free to medical appointments at Scottish hospitals.

But that's where it stops. I once saw an older English gentleman have a serious strop on a Perrymans bus when it was explained to him that his free pass was not valid all the way to Edinburgh. If he wished to travel by bus to the Scottish capital he would have to pay the full fare of £10 each way. He announced that in that case it would be cheaper to use his senior citizen's discount on the rail fare, turned on his heel and stomped off in the direction of the train station.

And don't even get me started on those bus services that are subsidised by the local education authorities either side of the border to transport children to and from school. Most of them allow the general public on board as well but they only run on school days. The problem is that the dates of school terms differ by several weeks between England and Scotland. So the weary would-be traveller, having established with the aid of bifocals and flashlight that those cryptic abbreviations on the timetable mean 'Only runs during Scottish school terms' or 'Does not run during Northumberland school holidays', is left in a whimpering heap trying to decide whether a bus is likely to turn up at this particular stop any time today.  And fervently wishing she'd tried harder during her driving lessons.