On a Promise, On the Tweed 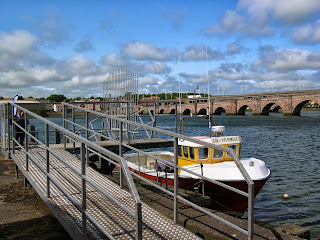 The great excitement of this summer in  Berwick was the beginning of boat trips on the river Tweed. Here is the boat moored at the specially constructed landing stage. It's called On a Promise. I always thought that phrase had a slightly risque meaning, but maybe that's just me. Anyway, the owner has been lured away for two days a week from his more lucrative regular business of taking well-heeled city types on angling breaks, and the bookings for this year's season were apparently very encouraging. Previous attempts to run boat trips were scuppered by the cost of insurance, which I would imagine is quite high when you are transporting members of the general public around on a river with a steep tidal range. This year the council finally coughed up to cover it, and away we went. 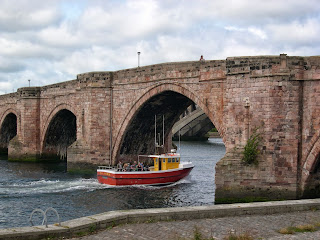 These photos were taken on the first day the service ran, a beautiful day in July. I followed the official photographer from the local paper along the quayside and got the benefit of the skipper obligingly slowing down to let her take some front-page-friendly shots. I didn't actually get around to going on a trip myself until yesterday, when I suddenly realised that it was the last week of the season and I had to go now or not until next year. Sadly the weather yesterday was very dull and overcast and the photos I took onboard were absolutely rubbish. Here is the best of them, showing the railway bridge from underneath. It was worth going though for the unfamiliar views of the old fishing shiels on the banks and the talk by David the skipper, who took the opportunity to inform visitors about the way he feels the traditional salmon fishermen were stitched up by the company that bought the fishing rights from them. Well done him. 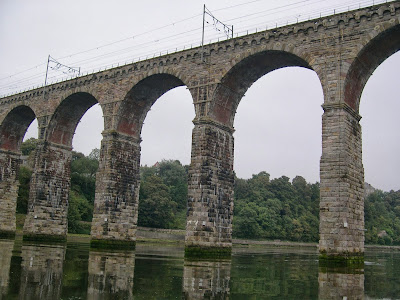