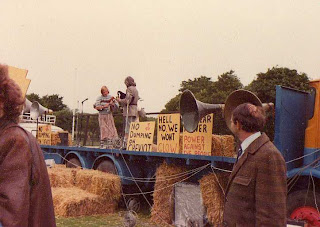 Greetings to all my readers from the desolate, remote and uninhabited North East of England. The description of the area as uninhabited came as a particular shock to those of us who live here. Yes, our home region was described thus last week by Lord Howell, who is none other than the father-in-law of our esteemed Chancellor of the Exchequer, George Osborne. The noble lord felt that it would be terrible to ruin the beautiful rural environments of Southern England by extracting shale gas there ('fracking'), but that there were areas of the country where nobody would be disturbed by this, notably the North-East. The headline in the Newcastle Journal next day was simply: "What on earth is he talking about?"

The photo above is a memento of a period in the 1970s when the powers that be in the South got the same idea about there being nobody much in Northumberland to be bothered by having unpleasant industrial processes dumped on them. At that time it was the waste products of nuclear power stations. They wanted to bury radioactive waste in the Cheviot hills. Needless to say this went down like a lead-lined balloon with the locals and there was a very active campaign of opposition, which incidentally provided my earliest exposure to the experience of political protest. Of course if we had accepted the expansion of the nuclear power station programme in the 1970s we might not have needed the large scale development of wind turbines which are getting local folk so worked up now - but then they're not proposing to put nearly as many of them in the Home Counties either.

The interesting thing about the form of words used by Lord Howell is their clear implication that sparsely populated areas of the South are rural, beautiful and unspoilt, while sparsely populated areas of the North are remote, desolate and uninhabited. Apparently his imagination will not stretch far enough to embrace the concept that the remote landscapes of Northumberland might be worth preserving in their unspoilt beauty as well. This has, sadly,confirmed all our stereotypes about the narrow life experience of those running the country. It has probably also made a good few people living here at the far end of North East England wish that the border could be moved just a few miles south and free us from being ruled by the likes of the Howells and the Osbornes once and for all.
Posted by Elaine Housby