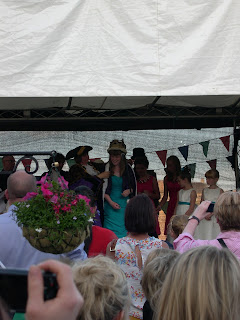 I'm very late posting about this year's Salmon Queen crowning (due to the internet problems mentioned in my previous post) but better late than never. It took place on Thursday 18th July during the period of glorious weather we've been enjoying this summer.

Here is the moment when Queen Annie was formally invested with the crown and robes. She made a charming acceptance speech to the effect that she has lived in Tweedmouth all her life and it is an honour and a privilege to be chosen as Salmon Queen. 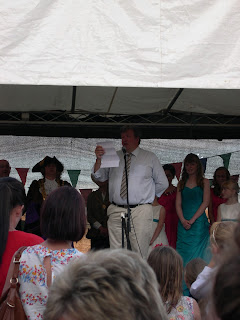 My fellow blogger Jim Herbert was chairing the Tweedmouth Feast committee this year. Here he is welcoming us to the festivities. Jim's blog, Timelines, is linked to in my sidebar. He knows an awful lot about historic buildings. 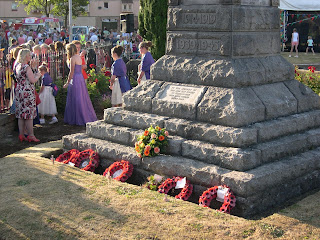 After the crowning the new queen and her attendants always lay a wreath at the war memorial adjacent to the riverside park where the festivities are held. It is in some respects an incongruous ritual but one very expressive of genuine folk culture (as opposed to the kind dreamed up by quangos and tourism boards).

As I watched the teenage party process away from the memorial in the dazzling evening sun, I reflected that their generation is growing up to think it normal to be at war.