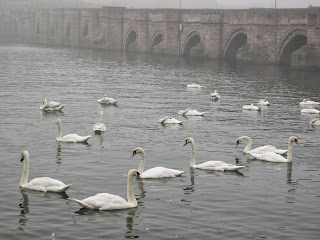 It seems to be a while since I posted any pretty pictures of wildlife, so here is a photo of some of the swans of Berwick enjoying a leisurely evening feed beside the old bridge. Despite the foggy look of the scene it was taken only a few weeks ago during the summer. A heavy mist known locally as a 'sea fret' is a feature of life here on the coast.

This is only a small fraction of the herd of swans that assembles on the estuary of the Tweed over the summer. It is common to see more than fifty together, and not that unusual to see a hundred or so, although when the numbers get that large it's hard to keep count of a constantly swimming target. They gather on the estuary during the moulting season in July and August because, apparently, they can't fly while their old flight feathers are being shed, so they need a safe place to hang out while the new feathers grow. They don't all go away in the winter though, there are always a fair few swans around on the river and on the sea just offshore. 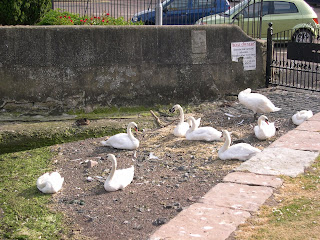 As you can see here, they don't even stay on the water all the time, they are sometimes quite happy to camp out on the slipway. A few weeks ago I saw a pair of swans with a group of 'teenage' cygnets comfortably settled here on the slipway, but by rotten luck I did not have my camera on me at the time. (I hear all serious photographers sucking their teeth in disapproval at this point - I know, I know, you should take your camera with you at all times.) Though it might in any case have been difficult to get a decent shot, as the parents stood up and spread their wings in a warning manner when I moved closer to get a good look.

And trust me, you don't want to get on the bad side of a swan. They come up to chest height on a human adult and that beak looks pretty worrying when it gets that close to your face. The closest encounter I ever had with one was during the heavy snow a couple of winters back. White swan sitting in white snow equals total camouflage. The first I knew about it was when a large angrily flapping creature rose up in front of me just before I stood on it. I was definitely more scared than it was. I didn't slow down until I got to the far side of the bridge.