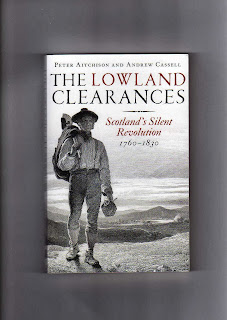 I have just finished reading this very interesting book: The Lowland Clearances: Scotland's Silent Revolution 1760-1830, by Peter Aitchison and Andrew Cassell. It is the book version of a series broadcast on Radio Scotland ten years ago. The cover design is based on an illustration to Burns' poem The Cottar's Saturday Night by the well-known engraver James Faed. He has a local connection: some of the Faed descendants live in Berwick and last year one of them arranged an exhibition of the artist's work at the Granary art gallery, which is on the top floor of the building whose ground floor cafe I habitually frequent.

The argument of the book is that the Lowland areas of Scotland suffered just as much social disruption, hardship and consequent emigration during the period of agricultural 'improvement' as the Highlands, but that whereas the Highland Clearances is an established term, there is no corresponding acceptance of the term Lowland Clearances. 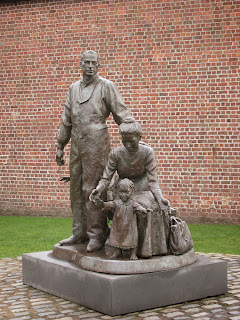 I've used this picture before in a previous post about emigration (here) but it seems worth recycling in this context. This memorial to mass emigration is in Liverpool, and most Scottish emigrants sailed from Glasgow, but they were the same kind of people: poor, desperate, seeing absolutely no future in the land of their birth and willing to risk a long voyage in horrible conditions for the mere possibility of a better life. Aitchison and Cassell make it clear that the prime attraction, the main driver of nearly all emigrants, was the possibility of owning their own piece of land. To escape forever from the payment of rent and the whims of the large landowners and their factors, to be the masters of their own destiny, that was the dream. For a large number of migrants the dream came true. One of the contributors to this book was a Canadian man whose ancestors were driven off their rented land in Lowland Scotland and subsequently became wealthy and propertied in Toronto.

The authors consider that the extent of population loss in the Lowlands, which includes the Borders, has been hidden by the fact that displaced tenant farmers in those areas usually migrated to the cities, notably Glasgow, in the first instance and only left the country altogether when they had failed to make a living there, whereas the image of Highlanders being marched straight from their ancestral glen to an emigrant ship is etched in the folk memory of both Scots and their descendants in the lands to which they travelled. It is also probably true that the Gaelic culture of the Highlands has a romantic appeal which the English speaking communities further south cannot match.

The take-home message of all this is that it is not inevitable that either the Highlands or the Borders are so empty of people. They used to be full of people making a living from the land. They could be full of people again, making a living in the new ways that modern technology has made possible. For the purposes of this blog I maintain strict neutrality on the subject of Scottish independence, but I am not neutral about the arrogant attitude of some English people that assumes large areas of Scotland have always been deserted and poverty stricken and always will be. That is just downright offensive.
Posted by Elaine Housby