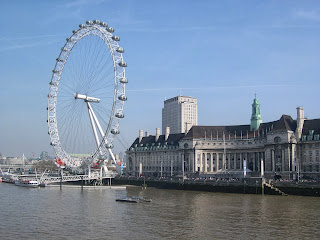 You have noticed that this is not Berwick upon Tweed?  Go to the top of the class! I am in London for a few days. Once a year I permit myself to write a blog post from somewhere outside the Debatable Land musing on what I have learned about home by travelling elsewhere.

This photo shows the London Eye, of course, and the building which used to be the home of the Greater London Council but now houses a hotel and the London Aquarium. The GLC was abolished by the Thatcher government because at that time it was very left-wing. The Houses of Parliament are just across the river and the two rival powers used to glower at and spy on each other across the water.

As we move closer to the referendum on Scottish independence, this historical episode seems more relevant. Many Londoners resent the fact that Scotland, a country of five million people, has its own parliament and aspires to total independence, while Greater London, a region of around eight million people, depending on how exactly you define it, no longer even has its own regional council. I can see the logic of this, but on the other hand there are many countries in the world no larger than Scotland - all the Scandinavian ones for a start - whose right to a full parliament nobody disputes.

London does now have an elected Mayor though. In fact it has a Mayor (Boris Johnson) who is a prominent member of the Conservative party but has frequently annoyed the Westminster government by demonstrating a lamentable independence of mind and tendency to put the perceived interests of Londoners before the policy of the national party. This is what strong local government of any kind tends does. Local knowledge and local interests lead to conclusions that outsiders did not see coming.

This morning I had a conversation with a friend and a friend-of-a-friend in London which left me with my head in my hands despairing of the ignorance of the English about Scottish politics and the history of the United Kingdom. I am seriously thinking of writing An Idiot's Guide to the Scottish Independence Debate and selling it on this site. Watch this space. The people I was talking to said that the English are entitled to have a say on the future of the UK. Of course they are, and it would be nice if they ever showed any interest in the subject. Instead, having ignored the Scots for, oh, about three hundred years now, they are whinging that they ought to be able to vote on whether or not Scotland should be allowed to leave the Union. This betrays an ignorance of the fundamental founding principle of the United Kingdom, which was an agreement by two sovereign states to enter into political union. This implies that either party can choose to withdraw from it at any time, without needing the permission of the other.

Put it another way, would the residents of the banks of the Thames accept being told that they could not decide to leave the UK and form an independent city state, as a substantial proportion of them seem to fantasise about, without a majority poll in Scotland agreeing to it?  I don't think so.
Posted by Elaine Housby