Berwick Barracks: a facility soon to be needed again? 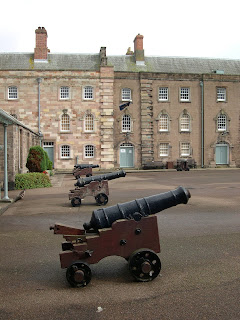 This is the main courtyard, or parade ground, or whatever they call it, of Berwick Barracks. Complete with original old cannon. The barracks are of architectural importance as they were designed by Nicholas Hawksmoor, on a short vacation from building London churches, and are apparently a rare example of purpose built barracks continuing in use for that original purpose from the 18th century until modern times. The last soldiers only moved out in the 1960s. They were members of the King's Own Scottish Borderers, Berwick's local regiment, even though Berwick is in the English and not the Scottish Borders. Anyone who's been following this blog will not be surprised by that characteristic Berwick anomaly.

So there is now a rather splendid chunk of 18th century architecture sitting there seriously under-used. A small proportion of the buildings houses three museums: of the town's own history, of the regiment, and the one containing a portion of the Burrell collection, better known from the much larger portion in Glasgow. All of these are theoretically free to enter but you can't get into them without paying the English Heritage admission fee for the barracks complex as a whole. To add insult to injury English Heritage is now refusing to open at weekends, thus making it impossible for any local residents who work office hours to visit their own museums. Well done, esteemed custodians of our cultural patrimony. As a very small compensation the barracks were open free to all over the weekend in September when the Heritage Open Doors event is held. I took these photos then, because I refuse as a matter of principle to pay a penny to English Heritage. 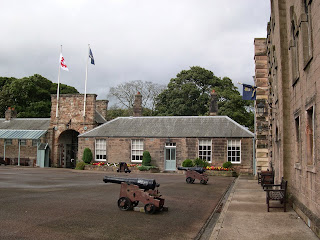 There has been some fairly lively discussion on suitable future uses for the buildings. A hotel seems the obvious one  And of course that large tarmac area just says 'car parking' to the typical Berwick mind-set. I though foresee a darker future for the barracks. They will make a perfect detention or internment camp for illegal immigrants, subjects of control orders on whom the authorities haven't managed to pin any actual crimes, or the new 'sturdy beggars', recipients of Jobseekers' Allowance who persist in being unable to find a job no matter how often the government tells them they jolly well ought to.

Some Scots believe that if Scottish independence becomes a reality the Westminster government will declare zones of English sovereignty around the nuclear submarine bases in their country. In that case they'll need somewhere on English territory to lock up stray Scots who wander into the exclusion zone. In all seriousness, if the political row over military bases continues down its present course things could turn very nasty. In that case we could see Berwick barracks being used once more for their original purpose, housing English soldiers in a location where they can advance across the border at a moment's notice.  Never mind being under-used, they'll probably have to build an extension.
Posted by Elaine Housby