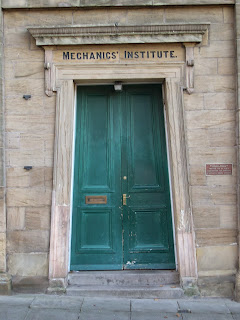 This is the Mechanics Institute in Alnwick, in Northumberland, a building that is what in other places might be called a community hall. It has several rooms that can be booked for meetings of clubs and societies, dance classes, etc.  Many hours of my life have been spent in this building, one way and another. Then for a while one of the rooms was used as the office of the local registrar, to whom one is obliged to report all births and deaths. This meant that when my father died I had the strange experience of having to register his death in a room a few steps away from the larger room where he attended the meetings of the Alnwick Camera Club, every Wednesday night at 7.30 pm, for years and  years.

Because this building was so much a part of my everyday experience, taken completely for granted, I was well into adulthood before it occurred to me that the design of the doorway is a bit odd.  In fact it looks like an Egyptian tomb. You can see on the picture of the upper part of the building that the theme is continued all the way up in the 'pylons' feature. 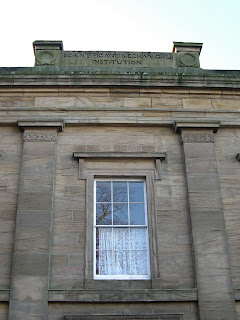 I thought about this again when I finally got round to reading the book Black Athena by Martin Bernal, which traces the history of scholarly attitudes to ancient Egypt. By the high Victorian period the racist belief that Africans could not possibly have contributed anything to the culture of classical Greece or of the rest of Europe had become dominant, but in earlier times there was a positive craze for and veneration of all things Egyptian. Bearing in mind that Alnwick has always been some way behind the trends in the metropolis, I reckon the Mechanics Institute must have been built when this craze was in full swing. Bernal also explains that the Masonic movement has stayed loyal to the veneration of ancient Egypt through all the shifts in intellectual fashion and still uses a plethora of symbolism derived from it. I wonder if there was any Masonic involvement in the building of the Mechanics. If anybody knows, do please leave a comment. 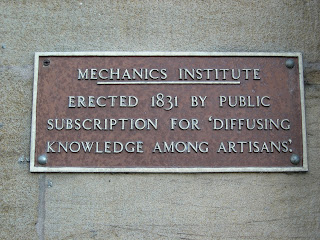 The other interesting thing about the Mechanics Institute is of course the reason for its existence, the fact that it was erected out of the purposeful idealism that aimed at 'diffusing knowledge among artisans'. This was a widespread movement in the 19th century.  Birkbeck College in the University of London, of which I am a proud alumna, started out as the London Mechanics Institute.

In the second half of the 20th century we were finally blessed with universal provision of free public libraries and the need for private libraries and newspaper reading rooms disappeared. Or has it?

My views on this have recently diverged from popular orthodoxy. Many British public libraries are no longer doing what they were originally supposed to.  They are full of mass market fiction, DVDs of Hollywood films and CDs of popular bands. Serious non-fiction is squashed into a small corner. Encyclopedias have entirely disappeared. In one way this is, of course, fair enough, since the internet is now a much more efficient way of distributing knowledge to the masses. But that means that the priority now has to be ensuring equal access to the web, and public libraries are not even managing to do that. The computer system of Northumberland public libraries is disgracefully inadequate. It is very slow and the versions of all the software are several release numbers out of date. It refuses to show any adverts at all, even ones that might be useful, or any user-generated photos, just in case they're 'inappropriate'. It has a very crude content filter which regularly blocks book reviews and history blogs because they have used a trigger word. And sometimes the whole system just falls over and dies for no apparent reason.

I would no longer take to the streets to protest the closure of public libraries. Frankly I wouldn't miss them. I am a loyal supporter of the Literary and Philosophical Society of Newcastle upon Tyne, a triumphant survivor of the age of private library provision. I feel that a second age of the necessity for it is dawning. And I would love to see the return of a (suitably re-named) Mechanics Institute, diffusing serious knowledge to the workers.