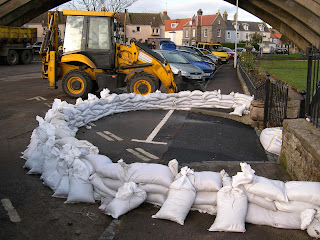 This was the scene beside the Tweedmouth end of the modern road bridge across the river Tweed this morning, a bright, calm day after a wild day and couple of nights on Wednesday and Thursday. Very strong winds combined with an unusually high tidal rise of 5.4 metres caused the river to overflow its banks at high water yesterday, which was at 16.03 according to the book of tide timetables on sale in the local angling shop, a copy of which I usually carry in my bag. After consulting it I went out at 4 pm to have a look. I know that makes me one of the sightseers loathed by the emergency services, but I like to think that I am not a complete idiot, and I stayed well out of the way of the rising water and of the workers. 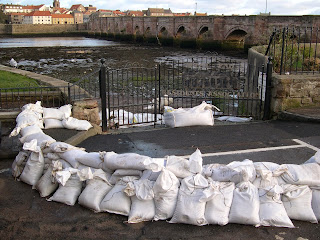 At 4 pm in December it is nearly dark and so I was unable to take any photos, even if I had wanted to risk getting any closer to the action. The water was pouring through this gate across the road. Police had blocked off the road with cones and firemen were wading (or 'plodging' as we say here) around knocking on doors and delivering sandbags. A care home is located just at the end of the old bridge, and the prospect of having to evacuate many elderly and ailing residents must have been worrying the police considerably, but luckily the turn of the tide came just before the water reached their door. 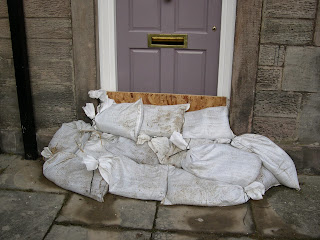 On the other side of the bridge the path beside the river was completely flooded and the police had fastened a criss-cross of their blue-and-white tape across the entrance to the path, for the benefit of any members of the public who can't be trusted to rely on the evidence of their own senses. On the quayside the water was level with the top of the harbour wall and breaking over it, until the benches where one can sit and enjoy the view in more clement conditions were swimming halfway up their legs in water.

Only a couple of hours after high tide the water had all receded and as far as I know had not entered any properties. There was some worry about what would happen at the next high tide at 04.43 am and I expect some homeowners stayed awake to see. That was predicted to be a rise of only 5.2 metres though and also the wind had died down, so it was okay. This morning the yellow highways agency signs saying 'harbour and seafront closed' have been taken down but the sandbags remain for the time being.

I confess that I found it exhilarating walking around in the twilight cold, observing a force of nature that we cannot control. But of course I would not be saying that if I lived in the house shown above. I used to envy the folk who live along the Tweedmouth river bank. Not any more!
Posted by Elaine Housby