Santa Claus Is Coming To Town 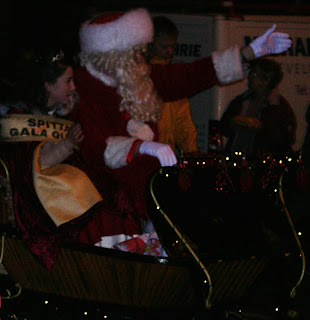 A very Merry Christmas to all my readers. Here is Santa visiting Spittal yesterday. Accompanied in his sleigh not by an elf but by the Spittal Gala Queen. His journey down Main Street was the culmination of a very well attended Christmas fete, with a funfair in the street and the Norham school brass band playing in the church hall while you browsed the stalls and refreshments.

The great attraction of the Spittal Santa is that he comes complete with real reindeer. Or rather, the last time I was there he came complete with a whole team of reindeer from the Cairngorm herd who earn their keep by being hired out to pull sleighs at Christmas. This year he was drawn by one single solitary reindeer. Maybe this is yet another example of Austerity Britain - perhaps we didn't put enough money in the donations tins last time to cover the cost of hiring a full team again. I was sufficiently concerned about this to put £1 in the bucket on the way out of the church hall, as well as spending £1.50 on the cup of tea and a mince pie meal deal. On the other hand, it could just be that the limited number of reindeer in Britain are in such demand at this time of year that their agent could only spare one for this little town. 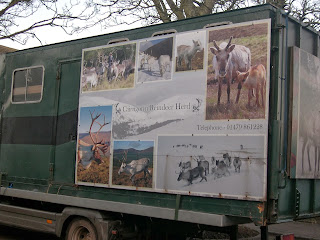 I took this photo two years ago when half a dozen reindeer came. I spotted their transport parked outside the local school playing field, where they were being shown off to the children before leaving to prepare for their sleigh pulling shift. I did see them being led back to the van but could not get close enough to grab a picture, as their minders were understandably careful to prevent them being mobbed. And of course photographing a single reindeer in the dark is even more challenging. I did not feel comfortable about letting off a flash in the poor creature's face. I wonder if these reindeer go on the sort of training course that police horses are put through, to get them used to noisy crowds? They certainly seemed very stoical about it all. Maybe they have just understood that if they play along with this human idiocy for a couple of weeks a year their reward is to roam free and happy in the Scottish mountains for the other fifty. 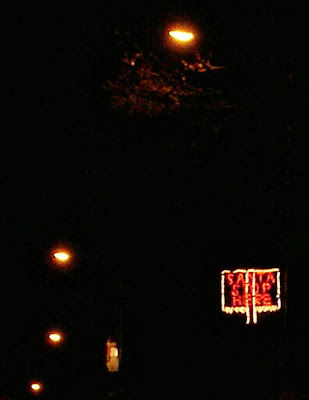