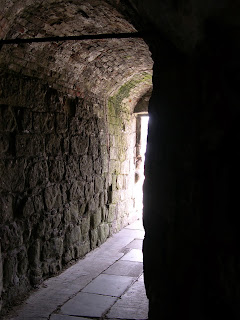 This is the Sallyport in Berwick, shown here to give me an excuse to say: as we finally emerge from the long dark tunnel of 2013 towards the faintly visible light of a new year, what can we expect here in the Borders?

Are We About To Be Over-run with Immigrants?

The media yesterday were doing their best to give the impression that we are. At one point after listening to the BBC radio headlines I peered gingerly out of the window, thinking that I would see a gradually thickening flock of Romanians and Bulgarians advancing stealthily nearer to the house, like the seagulls in The Birds.  But I couldn't see a single one, and the real seagulls were no more threatening than usual. The only effect of the lifting of restrictions on these migrants' right to work in the UK that I expect to see immediately is that Illi, the nice Romanian man who has been patiently selling the Big Issue in Alnwick since the shop he stands outside was a Woolworths, may finally be able to get a proper job.

Will the Scottish Independence Referendum Return a Yes Vote?

This is the big one. The polls all say No but some well-informed commentators urge against complacency. A Glaswegian activist told me recently that the result would be much closer than everyone is predicting, and added with complete seriousness, 'Alex Salmond is a master politician'. I was interested to see that no less an authority than the Financial Tines,  in its predictions for the year ahead, backed this up, saying that 'the campaigning genius of Alex Salmond should not be under-estimated'. So a few more people here in Berwick had better wake from their political stupor before September.

Does Anybody in the English Borders Actually Care About Any of This?

On the whole, I would say that the average Berwicker would only take an interest in Scottish independence if they thought it might affect the number of parking spaces in the town. Or the quantity of seagull droppings or the frequency with which the gutters get cleaned. If a resurgent Scotland ever decides to pursue a revanchist policy towards Berwick, it would scarcely take a campaigning genius. The place is anybody's for a multi-storey car park.