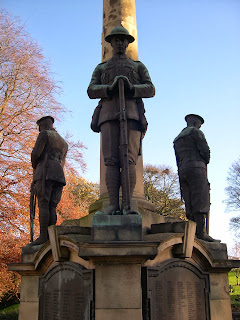 On 11th November the whole of Britain marks Armistice Day, the day on which the First World War ended.  It is now though more generally known as Remembrance Day and has become not just a day but at least a week of ceremonies to commemorate those who have died in all wars. Since the 11th is not often a Sunday there is always a debate about whether to hold the ceremony at the local war memorial on the nearest Sunday or on the 11th itself, and these days the dilemma is increasingly solved by doing both. Of course this new intensity is partly driven by the number of British soldiers who have met death or life-changing injury in Afghanistan and Iraq over the last twenty years.

To mark this season appropriately I am posting some photos of the war memorial in Alnwick.  Unlike the great majority of  towns whose inhabitants gather at artistically forgettable memorials the town of Alnwick in Northumberland is fortunate to possess quite a decent bit of public sculpture as its memorial.  It shows a soldier, a sailor and an airman standing in what I believe is known as the 'reversed arms' position. They stand out well against the clear sky of a cold November day. 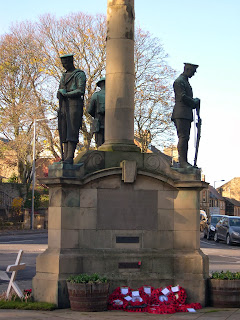 This monument was sited in its present position at a time when the traffic was not nearly as heavy as it is today. Older locals say that the idea was to position it at the intersection of three roads, with one figure facing towards each road, as if they were standing guard over it. This is a nice idea and it works very well. Unfortunately it also causes a lot of confusion for drivers, because most of them can't work out whether it's a roundabout or not. (It's not.)  Periodically some heretical person tentatively suggests moving it into the adjacent public park, but such an outcry always ensues that the idea is dropped again for another few years.

There is no doubt that the level of public reverence for those who fought in the two world wars has increased greatly since my youth. When I was a child the conventional wisdom was that the ceremonies commemorating the armistice would simply fade away as the generation for whom they had personal significance died out. Instead the reverse has happened,with the veneration of those who fought in the world wars as 'heroes' increasing in inverse relation to the likelihood of knowing any of them personally. 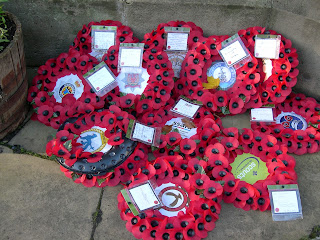 Both of my grandfathers had distinguished military records and my mother was an 'army brat', so I feel I know something whereof I speak here. The men who fought in the world wars just wanted to get on with the more enjoyable parts of their lives afterwards and forget about the horrors they had witnessed. Those who survived long enough to become the object of persistent questioning interest from young people about 'what it was like' seem to have been uncomfortable with it. I am sure that both my grandfathers would have been. Not because they were being modest about their heroism - indeed my paternal grandfather seems to have exploited his gallantry medal quite effectively in his subsequent career in local politics - but because they were just plain sick of talking and thinking about it all.
Posted by Elaine Housby