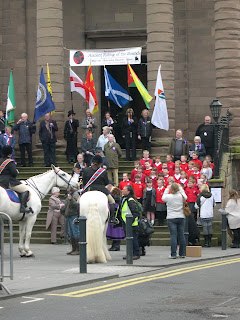 In other places the first day of May means a celebration of the workers of the world or the chance to put spring flowers in your hair and dance around a pole, but in Berwick it means only one thing, the Riding of the Bounds. Here is the scene outside the Guildhall at 10.30 am. This year's chief marshal, on the white horse, accepts the order to ride the bounds from the mayor. As a long line of other riders waits in the high street, a choir of local primary school children sings Oh Berwick for me. The man at the head of the waiting line joins in lustily and makes encouraging gestures at the crowd pressing against the barriers, but the crowd is too bashful to sing along. After some general cheering and clapping the horses wheel about and trot up the street and out of the town to the north, on their way to patrol the boundaries of the borough of Berwick. Are they clearly marked, secure and free from suspicious signs of incursions by Scots? 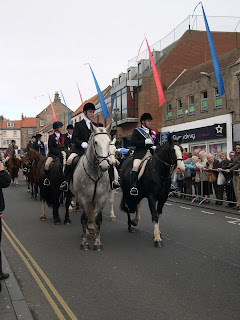 This ritual has allegedly been carried out continuously since the 16th century. Personally I have the gravest doubts about this, as the event shows every sign of being what anthropologists call ‘an invented tradition’.  I’m sure that in the days when Berwick was a true frontier town it was necessary to check the boundaries regularly, but this ceased to be politically relevant after 1707 with the Acts of Union between England and Scotland. Curiously enough the Acts came into effect on 1st May, so choosing this day to stage a re-enactment of the riding of the bounds has arguably turned it into a commemoration of its own redundancy. Nowadays the Riding is essentially a jollification for local people who are keen on horses. They have a picnic lunch and a bit of a gallop around, and then parade triumphantly back into town in the afternoon, to report that the bounds are safe. 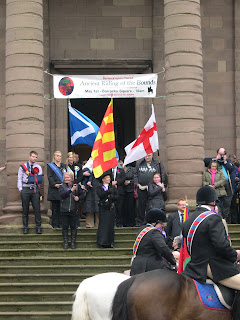 This photo shows the scene on the Guildhall steps at 3.15 pm. Getting a decent picture without any horses' backsides in the foreground proved difficult, but I think this one gives an excellent sense of the symbolism of the flags carried in the parade. On the left, the blue and white saltire of Scotland; on the right, the red and white cross of England; in the centre, the red and yellow check design which has been adopted in the last few decades as the flag of Northumberland. Here in visual shorthand is the political situation of Berwick upon Tweed, dutifully displaying loyalty to three jurisdictions, to none of which it actually gives wholehearted allegiance.
Posted by Elaine Housby