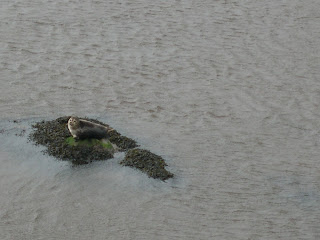 My March post about the young seal that had taken up residence beside the Old Bridge in Berwick seemed to be popular with readers, so I thought you might like to have an update. The seal is still there. Yes, two months later, it is regularly to be seen in exactly the same place. As you can see in this photo, it is quite aware of its human audience, and has indeed been accused by some of playing to the cameras. See how cute I am, it seems to say. By now the cameras mostly belong to visitors, the locals are so used to it that they hardly give it a second glance. But in the interests of my readers I went out in the kind of weather for which the Borders are famous to take these two pictures, in a wind so strong that it was impossible completely to avoid camera-shake, for which apologies. 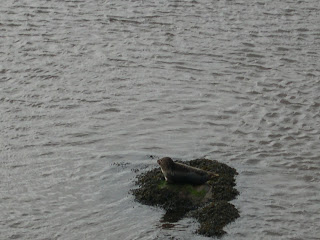 Why is it still there? This is not normal seal behaviour. Mother seals care for their pups for only a few weeks before becoming preoccupied with the next round of mating, and by now this youngster will have been well and truly booted out into the cold, cruel world. Most of its fellows swim back to the Farne Islands after their fishing expeditions and haul out on the rocks there when they need a rest and a snooze. But for some reason this one has fixated on this sandbank in the estuary. For a while we thought that it might be ill and too weak to swim away. But you can see that it has got bigger and fatter since March, so it is managing to catch fish somehow. 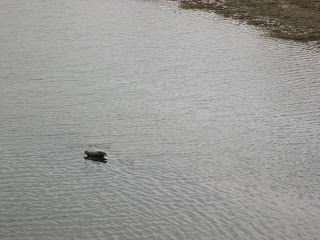 So great is its devotion to this particular spot that it is often seen swimming round and round waiting for the tide to fall far enough for it to be able to lie there. This photo on the left was taken a few weeks earlier and shows the seal triumphantly perching on a barely exposed piece of sand.

If any readers know more about seals than I do and can offer suggestions about what's going on, I would  love to have your comments. I have been trying to read any books I can find about seals, but there are surprisingly few of them. The Seals and the Curragh by R.M. (Ronald) Lockley is a lovely account of the author's time living among seals on an isolated stretch of the Welsh coast in the 1940s. It has a mystical streak which he developed further in his later book Seal Woman, a fantasy novel about a love affair with a woman who appears to be half seal. Myths about such seal women seem to be found in the folklore of many regions. Any recommendations for seal related reading would be welcome.
Posted by Elaine Housby