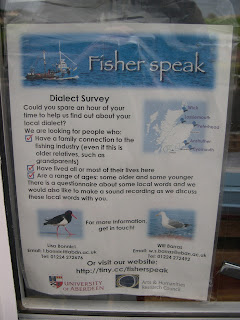 For this post I have shamelessly borrowed the title and logo of a fascinating research project undertaken at the University of York. I hope they won't sue me for this because my intention is only to encourage you all to learn more about their work. The project is called Accent and Identity on the Scottish-English Border, or AISEB for short.  The picture on the right is of a poster spotted in the window of the Fishermen's Mission in Eyemouth, seeking to recruit subjects for what sounds like an equally interesting piece of linguistic research being undertaken at Aberdeen.

I first learned about AISEB from a talk given by one of its researchers to the Berwick Civic Society back in May 2010. We listened rapt as he ran through graphs and played sound clips which provided hard scientific proof of what all of us in the Borders know intuitively from everyday experience. Accent follows the line of the political border. No matter that there are no physical barriers whatsoever between Berwick and Eyemouth, that the bus journey between them takes only fifteen minutes and runs every half hour, that many people commute across the border every day - the accent boundary between these two towns falls like a curtain at the point on the road where the signs say Welcome to Scotland/ England and the difference between the two sides of that curtain can be detected by wholly objective recording equipment.

The researchers concentrated on certain key features of pronunciation, notably the presence or absence of a trilled quality to the letter R, and the length of the vowel sounds, which most clearly differentiate Scottish and English speech. Not only is the difference between towns on opposite sides of the border but only a few miles apart quite distinct, the difference is becoming greater over time. The researchers recorded older and younger groups of subjects and found that the difference is more marked in young people in their teens and twenties. One delightful anecdote concerned a young couple who were in Borders terms a mixed marriage, where the wife worried about her husband's speech impediment - an impediment which the researchers found to be nothing more than his English pronunciation of the letter R.

There is some evidence that this process of increasing differentiation is a very long term trend. In his book about the Border Reivers, Alistair Moffat quotes from 16th century reports which comment that it is impossible to tell which side of the border a person comes from by their speech. These observations were made in the context of intense exasperation on the part of the authorities at the difficulty of keeping track of the shifting political and military allegiances of Borderers, who were sometimes known to change sides in the middle of a battle if it seemed advantageous. Evidently such fluidity was helped by the lack of association between speech and nationality. As the process of political centralisation advanced and the Borders were brought more under the control of their respective capitals, dialect became increasingly identified with national loyalty. The coming of compulsory education probably speeded up this development. Scotland and England have different education systems and it is awkward to transfer between them during the exam years, which means that most children experience a schooling which is either entirely Scottish or entirely English. Peer pressure in the playground brings about conformity in speech. The latest development is that - get this! - there is a statistically significant correlation between the strength of a person's support for Scottish independence and the objective Scottish-ness of their speech. Yes, even in Eyemouth, only five miles into Scotland. This may seem hard to believe, but the nifty computer programmes of AISEB have proved it.

The researchers at York merely observe, they do not presume to explain. Any comments and ideas on this subject would be welcome. In a future post I will write more about the speech of the Northumbrian side of the border.