The Diamond Jubilee: the final flourish of the Union Jack? 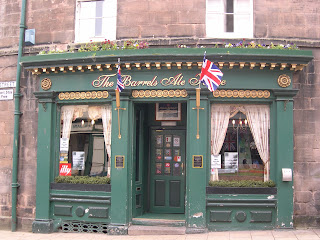 Berwick upon Tweed is covered in a rash of red, white and blue bunting for the Queen's Diamond Jubilee. The shops have been having a competition for the best window display with a Jubilee theme. On the left, the Barrels pub, known for real ale and good music, flies the flag. But for how much longer will the said flag be flown anywhere?

The Union flag (strictly speaking the name Union Jack only applies to the nautical version) was created by combining the flags of England, Scotland and Ireland. The 'blue' bit of the red, white and blue comes from Scotland. There is very little understanding of this fact among the English general public, and howls of outrage can be anticipated if and when an independent Scotland demands that England remove the Scottish element from its flag. Personally I think that the real grievance lies with the Welsh, whose flag has never been incorporated into the Union Jack. That big red dragon just didn't fit in with all the crosses. Since Wales now has its own movement for independence, there's not much point in trying to add it at this late stage. The red and white cross of England is a familiar sight at sporting events and I think that most of the English could get used to having it as their only flag without too much difficulty. Northern Ireland is another matter - what the residents of the Shankill Road would tie to their lamp-posts after the abolition of the Union flag boggles the imagination, but that's a question outside the scope of this blog. 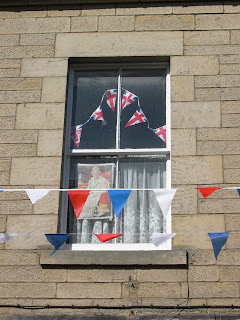 Watching the television coverage of the Jubilee pop concert held outside Buckingham Palace, I was surprised when in the finale, as the red, white and blue lights played over the facade of the Palace and the red, white and blue fireworks exploded above its roof, the band segued directly from God Save the Queen into Land of Hope and Glory. This will probably have upset a fair few of the non-English citizens of the UK. The anthem Land of Hope and Glory is purely English. It is played at sporting events where England is competing independently of the other nations of the UK. There seems to be no justification for playing it at an event which was above all intended to bring all the Queen's subjects together in harmony, and the decision to do so was a piece of populism ('they love singing it at the rugby, don't they?') which showed no awareness of Scottish or Welsh sensitivities. 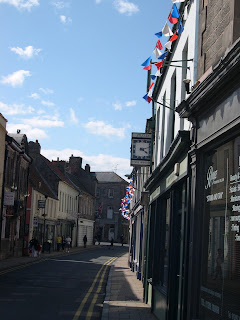 Alex Salmond has been careful not to pick an unnecessary fight by calling for Scotland to become a republic as well as independent.  The decision on whether an independent Scotland would wish to sever links with the monarchy is one for another referendum at a much later date, says the official SNP position, and in the meantime Scotland would become simply another member of the Commonwealth, retaining the Queen as head of state. Indeed the Queen's position as monarch of Scotland is arguably separate from her occupancy of the English throne. The two monarchies were by accident of inheritance united in the same person, that of James 1 of England and VI of Scotland, in 1603, and have continued to be represented by the same person ever since, but the claim to the two thrones, according to some constitutional lawyers, remains distinct. In 1953 there was a strong lobby demanding that the Queen have a second coronation in Edinburgh, in recognition of this fact, but that was dismissed by the English Establishment types running the show. King Charles III (or Charles IV for those with Jacobite sympathies) on the other hand is very likely to be obliged to make the journey to Holyrood for a second ceremony.