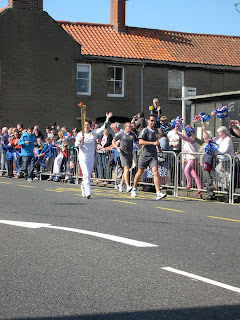 The Olympic Torch arrived in Berwick today. Here it is. Look, you can actually see the flame. It spent the day making the journey through the heart of the Debatable Land from Edinburgh to Alnwick, according to a schedule worked out to the minute by the people whose rather strange job it is to organise these things. The torch was to arrive in Berwick at precisely 16.33 and leave at 17.10. Everyone wanted to get the dramatic photo of the Torch crossing the Tweed Bridge, and accordingly the crowds on the bridge were so dense that the chances of anyone succeeding were slim. I therefore decided to take up my position at the top of Castlegate where the backdrop is less impressive but the crowds were thinner.

The amount of fuss that has been made in anticipation of this blink-and-you've-missed-it event is extraordinary. Funds have been produced from thin air to paint all the bollards on the bridge, to make sure they look their shiniest in all that media coverage of the Torch 'crossing the border', and to place tubs of flowers at strategic locations. No fewer than five bands were playing at various points along the thirty-seven minute route and hundreds of people appear to have been prepared not only to turn out to cheer but to pay £2 for a Union flag to wave at the same time. The merchants of flags, balloons and whistles who were working the crowds hard all afternoon made me think, rather incongruously, of the souvenir sellers who reportedly made a good living out of the crowds at public executions a few hundred years ago. 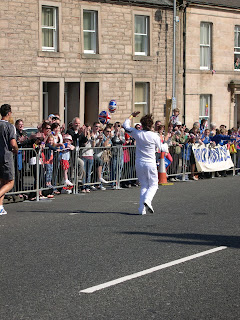 The procession surrounding the torch was one of the most bizarre public spectacles I've ever seen. It began with a big yellow bus whose destination board said 'London 2012' and continued with a big red bus representing Coca-Cola and a big blue bus representing Samsung, with promo girls on the open decks shouting rousing slogans to the crowd at a level of amplification that drowned out the local bands. A more modest car bearing the logo of the third sponsor, Lloyds TSB, brought up the rear. There was then a very long gap, a good five minutes, before the excited Torch bearer herself appeared, smiling broadly and generally looking thrilled to be there.

The organisational abilities of London 2012 have not extended to arranging for all Torch bearers to run in their own home town. Only one of the seven bearers in Berwick lives in the town, but several other Berwickers are running in other towns. One of them was originally told to travel several hundred miles to the north of Scotland to do his stint, until a last minute change was agreed. Presumably this is because distances so far from London appear compressed to those sitting in Canary Wharf.  'It's all The North, isn't it? It's not like we're asking people to travel from Islington to Lewisham, that really would be unreasonable.'

Interspersed throughout the procession were numerous cars and motorcycles bearing members of the Metropolitan Police. Not the local Berwick constabulary, but the Met, which is the London police force.  They were behaving in a manner most unlike normal police demeanour, waving and smiling at the crowds, leaning over to shake hands with bystanders. The Met is apparently on some sort of nationwide charm offensive. The message on one of the cars informed us that we can now follow the Metropolitan Police on Twitter. (Imagine it. '3.07 a.m. I'm chasing a villain round the estate. Oh dear, he seems to have got away while I was typing this tweet.')

I've had a jaundiced view of the Olympic Torch ritual since I learned that it first appeared at the Berlin 1936 Olympics. To be fair, the flaming torch is a common motif in the Art Deco style of the period, and did not as far as I am aware have any special National Socialist significance. But it still makes the whole business hard to warm to. Invented by Nazis, sponsored by Coca-Cola, organised by Londoners who don't know where the Scottish border is - yet somehow still a good enough excuse for an enjoyable afternoon out. The Berwick Advertiser reports that one local lady has been telling her doctors for years that she just wants to stay alive long enough to see the Olympics, and is now excited beyond words to be celebrating her 90th birthday on the day the Torch passes through her home town. Good for her. 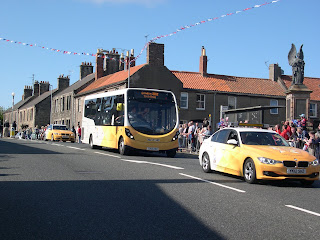