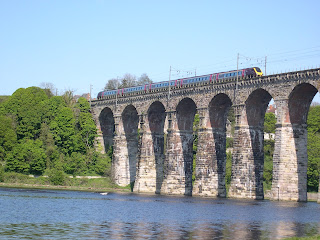 :
"This is the night mail, crossing the border, bringing the cheque and the postal order ... " Anyone old enough to remember the famous film about the post office trains with its verse commentary finds it almost impossible to stop themselves quoting these lines when they first see a train going over the railway bridge at Berwick. Obviously this isn't the night train, because if it was dark I wouldn't have been able to take a picture - duh!  And, as previously explained, this bridge does not actually form the border between England and Scotland. Despite this it was officially named the Royal Border Bridge when it was opened in 1850. The architect-engineer was the great Robert Stephenson, son of the even more famous George, who invented the first locomotive. Queen Victoria came to declare it open but refused to cross the bridge herself because she thought it didn't look safe. 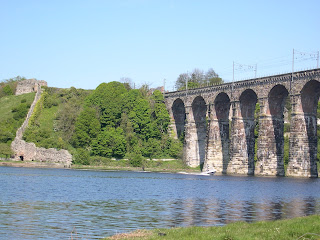 It's a dramatic sight, and the fact that I can just see trains going over this bridge from my kitchen window outweighs all of the less desirable aspects of my kitchen. Though I wouldn't want to live in any of the houses in Tweedmouth which are so hard against the bridge that curious passengers can look down and see what the residents are eating for their tea. The railway line was driven ruthlessly not only through the villages of Tweedmouth and Spittal but through the ruins of the medieval castle of Berwick. Imagine the fuss if they tried that now. The second picture shows the sole remaining wall of the castle (and a water-skier about to zoom through an arch of the bridge in impressive fashion). I confess to a sneaking admiration for the Victorian spirit of progress which felt that building splendid new structures was better than preserving every last relic of the past. Goodness knows there are plenty of other castles in Northumberland and southern Scotland. In fact I can suggest a couple of others that English Heritage and Historic Scotland could cross off their lists and leave to decay with no great loss to anyone.

A burden shared by Berwick and Dunbar is that they are the main reception stations for passengers who after a hard evening's partying in the Scottish capital have boarded a train at Edinburgh Waverley station in a state of noisy intoxication and end up being ejected from it by the staff with the help of police whom they phone and ask to meet the train at the next station. The seriously obnoxious revellers only make it as far as Dunbar, twenty minutes out of Waverley. The marginally more sober are tolerated for forty minutes and then dumped at Berwick. Such people then find themselves spending a night in police cells and appearing before the local magistrates (in England) or sheriff (in Scotland) the next morning. For those partygoers who were travelling back to homes much further south it must be a strange and disorientating experience to find themselves hungover in a court in the Borders, especially if it's a Scottish court using unfamiliar terminology. From a recent case reported in the local papers I learned that the offence which is boringly known in England as 'resisting arrest' is in Scotland called 'obstructing or hindering a constable in the execution of his duty', which has an archaic ring which I quite like. After all, the phenomenon of rowdy drunks is much, much older than the railway.
Posted by Elaine Housby