This is Berwick parish church, surrounded by the current spring loveliness. When I say parish church, it’s the Church of England church of the Church of England parish, which means that it’s what Americans and Scots call Episcopalian, a word never used and rarely even understood in England, where the C of E is tautologically defined as Anglican. Only a stone’s throw away is another church, which is of the persuasion now known in England as United Reformed, formerly Presbyterian. This one however never describes itself as United Reformed but always as Church of Scotland, because it’s so close to the border that everyone knows what that means. The Church of Scotland is Presbyterian. Just to emphasise the point, the C of S church in Berwick is dedicated to St Andrew, patron saint of Scotland. The C of E church is dedicated to the Holy Trinity and St Mary. On the whole those who attend the C of E in Berwick are English and those who go to the C of S are Scottish or have family origins north of the border.So far, so typical of the religious divisions of the United Kingdom. But what makes Berwick parish church very unusual, quite independently of its position as the northernmost bastion of Anglicanism, is that it is one of only two churches in England built during the period of the Protectorate of Oliver Cromwell.

Some of my readers may by now be feeling a little lost in the maze of English history. The Protectorate refers to the form of government during the twenty year interregnum between the deposition and execution of King Charles 1 and the restoration of the monarchy under his son Charles II in 1660.  As far as I can tell, the provision of the funds for a new church was not due to any particular favouritism or reward for loyalty by the Cromwell government to the citizens of Berwick but simply because the previous church was by then in a ruinous state and urgently needed to be replaced. 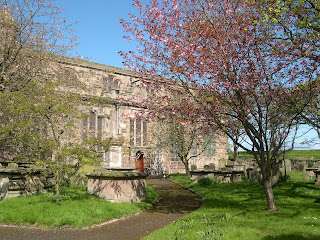 The architecture of the church embodies the religious principles of the Cromwell government. It has no spire or tower in which bells could be housed and is built in a plain square shape. Internally, it originally had  no altar, no screen across the nave, no coloured glass and no wall decoration of any kind. Unfortunately the Victorians could not leave well alone and the original purity of the design has been sacrificed to the nineteenth century love affair with Gothic. An altar, a screen and an organ were installed and a few stained glass windows, though the church still has far more plain glass windows than is usual in English churches. The problem of the lack of bells was solved by building a bell tower as part of the Guildhall, erected in the eighteenth century. The sound of bells ringing inside this secular structure has been a source of endless confusion down the years. Some visiting preachers have even been known to turn up at the Guildhall on Sunday morning by mistake.

When I first came to Berwick I was entranced to find this memorial to the English Revolution, as it was termed by the historian Christopher Hill, of whom I am a fan. Great was my disillusionment to read that the vicar had attended a service held in London on the anniversary of the execution of Charles 1, apparently to apologise and atone for this act. Those of us who are not wholly convinced that the abolition of the monarchy is an event to be deplored wish to dissociate ourselves from our vicar’s actions in this regard. Next month a service to celebrate the present Queen’s sixty years on the throne will take place in the church, which I’m sure will be a bitter disappointment to any spirits of the revolutionaries of the seventeenth century that still linger among the stones.

Political and religious views put aside, we can all share in condemnation of the recent theft of the church's original seventeenth century lead drainpipes. These unique and irreplaceable items, worth far more as historical artefacts than the value of their metal content, have become just one more piece of our national infrastructure to have disappeared into the hands of unscrupulous dealers in scrap metal as commodity prices soar.  And sadly I never got around to having a good look at them before they went.