Whatever Happened to the English Borders? 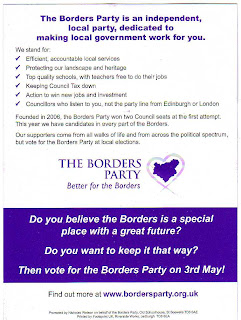 This flyer recently arrived in my letter box. Since I wholeheartedly agree that ‘the Borders is a special place with a great future’, I got rather excited at the prospect of a Borders Party. At last, someone has recognised the special problems of living on the border and started a party which will just stick up for this area and not be dictated to by either Edinburgh or London! I looked up their website. Alas, it was immediately clear that the Borders Party is only concerned with the Scottish Borders and has no candidates in Berwick. I fired off an email demanding to know why in that case they had bothered to deliver leaflets to Berwick. From the party’s headquarters in Jedburgh its leader, Nicholas Watson, sent me a cheerfully apologetic reply, explaining that this was an unavoidable consequence of taking advantage of the Post Office special rate for delivering to every address in a postal district. ‘We have raised a few eyebrows in Biggar as well’.

Berwick on Tweed has the postcode TD. This is a cross-border postal district which covers a fair amount of land on either side of the river Tweed (from which the code TD is presumably derived).  This is a source of enduring annoyance to some English loyalists who resent the fact that Berwick was not allocated to the NE (for Newcastle) area which covers all the rest of Northumberland, and see the anomalous postcode as an expression of a lack of commitment to the far north of the county by English local government. On a practical level, having a cross-border postcode sometimes throws up deliveries of junk mail which is irritating not merely for being unsolicited but for being addressed to the residents of another country. The RNLI exhorts  me to ‘support our Scottish lifeboats’. All of the supermarkets assure me that their milk is obtained 'from local Scottish farmers’. Meanwhile, there used to be a textile recycling bank outside our local Asda which promised that ‘everything donated in Scotland is recycled within Scotland’. Interestingly,  Asda stuck a large notice on it saying that this bank was unauthorised and should be removed, and eventually it was. I couldn’t say whether this was a corporate response to local sensitivities, but none of the recycling banks there now make claims about working in any particular geographical area.

What upsets me at a deeper level however is the increasing appropriation of the term ‘Borders’ by the Scottish end of the area as their exclusive property. When I was growing up in north Northumberland it was accepted that England had border country and that we were living in it. Historically the town of Alnwick has been considered to be the southern limit of the Borders, leaving a stretch of around forty miles regarded as the English Borders. There was a popular sense that the English and Scottish Borders were essentially a common region and that people living on either side of the line had more in common with each other than with the dominant urban areas of either country.

This started to change in 1996 when the name of the local government authority in south-east Scotland was changed from those of the historic counties it covers to Scottish Borders Council. This has led to a routine ambiguity, in speech at least, about whether the term Borders refers to the local government area covered by S.B.C. or to a loosely defined geographical region, and seems also to have hastened the disappearance of the term English Borders from popular use. The formation of a Scottish political party called the Borders Party looks like the ultimate expression of this. To be fair, Mr Watson did say in his reply to me that he feels Scottish politicians should recognise the shared heritage and common problems across the border more than they do. But I still resent receiving a flyer that promises ‘candidates in every part of the Borders’ when I have no possibility of voting for one myself.