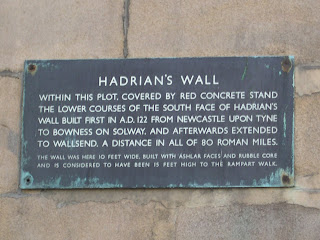 This week Debatable Land has travelled to the furthest limit of its range and brings you a photo from the heart of Newcastle upon Tyne. I am very fond of Newcastle and I urge you to visit it sometime, but describing its many attractions is outside the remit of this blog. The reason I’m going there now is to clear up the confusion about the location of Hadrian’s Wall. The term ‘the land north of the wall’ is sometimes used in loosely the same sense as ‘the debatable land’, but it has a much more precise meaning.

A remarkable number of people, and not just overseas, are under the impression that the ‘Roman Wall’, built by Emperor Hadrian in the year 122, followed the same route as the modern boundary between England and Scotland. This is NOT repeat NOT the case. For a start, nations in the modern sense did not exist anywhere at that period, let alone those of England and Scotland. The island of Britannia was still divided up into the territories of different tribes. Monarchy in a form we would recognise it emerged a few hundred years later and then for a few more hundred years after that the Scottish kings tried to push the border of their territory further south while the English kings tried to push it back north.

The Romans built a bridge across the river Tyne (Pons Aelius) and  a fort at the north end of it. Then they built a big wall on the north bank of the river, and eventually extended it across the whole width of Britannia. Yes, that is how Wallsend got its name. To complete a total defence against any attack by land or sea they later built forts on either side of the estuary of the Tyne, Segedunum and Arbeia, respectively located in what are now Wallsend and South Shields. The Wall itself survives only in some sections further west, but the line of it runs right through the centre of Newcastle. The main train station is situated about a hundred yards south of the line of the Wall, so if you walk towards the city centre after arriving there you are already technically in ‘the land north of the Wall’, even though drinking a latte in a packed shopping mall may not be how you imagined this barbarian territory.

The plaque in the photo is attached to the wall of the Literary and Philosophical Society of Newcastle, a thriving private library and cultural centre which could not be further from the stereotypes, both ancient and modern, of the Barbarian North. The red paving stones it refers to are a bit grubby now, but can still be distinguished by anyone who is sufficiently interested. Sadly very few visitors are. Step inside the library, find a copy of Rosemary Sutcliffe’s The Eagle of the Ninth and read the dramatic scene where the hero, fleeing from hostile tribesmen, hammers on a gate in the north face of the Wall and demands admission ‘in Caesar’s name’. Then thrill to the knowledge that that Wall was located right underneath your feet.
Posted by Elaine Housby