From Russia With Loyalty Cards 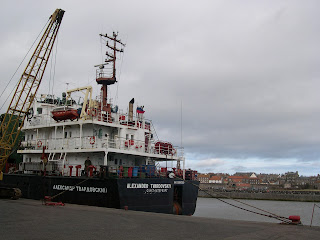 This is the most interesting arrival in Tweed Dock over the last few weeks: the Alexander Tvardovsky, registered at St Petersburg and flying the Russian flag. Since in these security conscious times the harbour gates are covered in notices warning of Restricted Access to Unauthorised Persons, I had to get the best photo I could manage by poking my camera between the dock railings. A number of other locals were doing the same thing, to the amusement of the solitary crew member who had been left on deck while the dock crane did its work.

Tweed Dock is located on the south bank of the estuary, which strictly speaking is Tweedmouth, not Berwick. Just as a matter of interest, Tweedmouth, unlike Berwick, has never been part of Scotland. Many centuries ago Berwick was the most prosperous port in Scotland (which is one reason why England wanted to get its hands on it) and early photography recorded the quayside there still thronged with ships in the 19th century, but no commercial vessels sail from the north bank today.

Business in the south side dock has picked up over the last couple of years and is now relatively brisk. At the moment a new ship seems to appear every few days. Some of them are regular callers on their route up and down the east coast with mundane cargoes of fertiliser and cement, but some of them are relatively exotic and trying to identify the flag is always fun.

Tweedmouth has been a seafaring community for a long time. In the graveyard of the parish church, just across the road from the dock, are many headstones commemorating maritime connections.  A number of them describe those buried there, men who survived the sea long enough to be interred at home, as ‘master mariner’. Some graves though preserve only the names of those buried far away. One of them is sacred to the memory of a man who ‘died at Petersburgh’ in 1829 and another to one who ‘died at Dantzic’ (now Gdansk) in 1866. It is as if the 20th century interlude when free travel between Britain and Eastern Europe was impossible was a mere blip, and now the ageless imperatives of trade have once again brought Russians and Poles to Northumberland and sent Britons off travelling east.

During the severe winter weather in late 2010 I saw three young men shouting cheerfully at each other in Russian as they pushed the most heavily laden shopping trolley I have ever seen from a nearby supermarket to a ship moored in the dock. The nonchalant ease with which they manoeuvred it down a snow-covered hill was a clue to their national origins. The trolley looked as though the addition of so much as an extra packet of crisps might cause the wheels to buckle. It disappeared inside the No Unauthorised Access area, bearing enough food to sustain the crew all the way back to the Baltic.
Posted by Elaine Housby