The Edge of Europe? 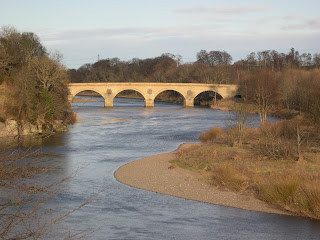 Here is a picture of another bridge over the Tweed. This one spans the water between Cornhill and Coldstream, and at this point the river forms the English-Scottish border. On the left side of the picture: Scotland. On the right: England.

There is an old building at the north end of the bridge known as the Toll House or Marriage House, which until the mid nineteenth century was one of a number of venues for marriages of runaway English couples taking advantage of Scotland’s more flexible arrangements for marriages without parental consent and without prior notice. The best known of these is of course Gretna Green, at the western end of the Borders, and, because the border slopes down from east to west, conveniently further south and thus a shorter journey for English lovers. Minor differences between the marriage laws of England and Scotland still exist, but now that most young couples are happy to set up home together with or without parental consent, the Marriage House has not seen an elopement for a long time. It seems possible though that if Scotland votes for full independence it could find a new use as a passport and customs post.

The Vote No campaign is already warning that independence would mean full passport controls between Scotland and England. This seems implausible. A very few hours of driving around the Borders will make it obvious that, as generations of monarchs before the Act of Union were well aware, this frontier will never be fully defensible. Even if the powers-that-be set up checkpoints on every road and bridge, there are an awful lot of fields and woods through which any reasonably able-bodied illegal migrant could easily stroll. Not to mention the possibility of splashing their way across the Tweed a few hundred yards upstream from this photo, where the guards wouldn’t be able to see around the bend.

Such scenarios become even more startling if we take seriously the argument that an independent Scotland would lose its membership of the European Union as part of the United Kingdom and have to re-apply for membership in its own right. Could the bridge in this picture become the boundary of the European Union? It is difficult to imagine, but history teaches us that the unimaginable sometimes happens.
Posted by Elaine Housby