'Bought and Sold for English Gold' 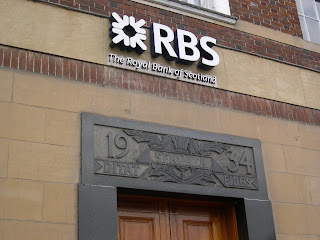 This week’s photo is not as pretty as previous ones, but there is a good laugh concealed in it. This is the inscription above the door of the Kelso branch of Royal Bank of Scotland. Kelso is a market town on the north bank of the Tweed about half an hour’s drive west of Berwick. A spot of googling reveals that the Latin motto ‘ditat servata fides’ translates as ‘faithful conduct enriches’. If only RBS had borne this in mind more recently than 1934! As the whole world now knows, it has spent the last few years discovering to its cost that irresponsible conduct impoverishes. So much so that, instead of the Royal Bank being poised to take its place as the financial flagship of an independent Scotland, one of the biggest issues to be hammered out in the event of a Yes vote in the referendum will be how its huge debts will be divvied up between Scotland and England.

Alex Salmond, leader of the Scottish National Party, used to be a banker before he became a full-time politician, and so is presumably well aware that it was a financial crisis which forced Scotland into union with England in the first place, back in the 18th century.  It was this event which prompted Robert Burns to write the line I’ve used as the title of this post.  The independent Scottish currency of that time continually lost value against the English pound sterling. Whether the same would happen again, I could not possibly presume to speculate.

The Royal Bank of Scotland, the Bank of Scotland and the Clydesdale Bank issue their own banknotes. Cash machines north of the border dispense notes issued by one of these three banks. At the moment the difference between English and Scottish banknotes is purely in their design. There is no question of their actually being separate currencies. Whether this will change if Scotland becomes independent is still unknown. At one time the SNP hankered after joining the euro, but in light of the current crisis in the eurozone that option looks a great deal less attractive.

Naturally, both English and Scottish notes circulate indiscriminately around the Borders. Any shopkeeper in Berwick will take a Scottish note without a second glance, and  the self-checkout machines in the supermarkets here accept them without so much as a beep. The further south you go, the more likely you are to find them treated with suspicion, and, even though Scottish notes are officially legal tender throughout the UK, I usually try to avoid having any on me when travelling south of Newcastle. I was once standing in the queue in a Berwick supermarket when a visitor from Down South received a Scottish tenner in her change. She inspected both sides of it closely and held it up to the light. She enquired of the cashier if this was a Scottish note. The cashier confirmed that it was. The customer asked if it could be exchanged for an English note, as she might have trouble spending it back home. The cashier obliged. After the anxious southerner had taken her shopping and left, some dry remarks were passed among the queue.

If Scottish banks break free of sterling, those of us who regularly shop cross-border may be obliged to give up cash altogether and stick to the international currency of plastic.
Posted by Elaine Housby