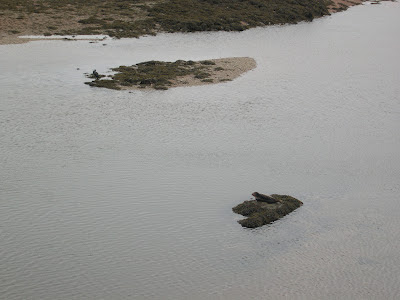 This seal has been attracting attention recently in Berwick. It has taken to lying on this sandbank beside the old bridge at low tide. From its size it seems to be one of last autumn’s babies. Some observers have seen an adult seal, probably its mother, swimming near it, and there has been speculation on whether its mum lets it out to play for a while and then comes to fetch it home for its tea. Once comfortably installed on the sandbank it is reluctant to move, and a friend reports that she watched the tide rise right up to its nose before it finally started swimming.

Seals are a frequent sight in the estuary of the Tweed over the winter months. They congregate to breed in the autumn on the Farne Islands, a group of small islands a few miles off the coast of North Northumberland. As they hunt for food they follow the fish which are brought into the estuary by the rising tide, and so they are most often seen at high water. I was once lucky enough to see a seal lying on its back holding a fish between its flippers and apparently tossing it up and down just for fun.

There have probably been seals off the coast of North Northumberland and South East Scotland for as long as there have been people on the land. There are many stories describing Saint Cuthbert’s relationships with wildlife during his time living as a hermit on Inner Farne (where he died in the year 687). It is said that the power of his preaching was so great that even the seals came to listen to his sermons. This story may have arisen from the typically inquisitive behaviour of these intelligent mammals. It is common to see one or two seals near the quayside holding position with their heads above water and staring intently at people on the shore. On several occasions I have been the object of their interest, and it has always given me a privileged feeling of encountering another species in a relationship of equality, each of us in our natural habitat, wondering in a friendly way about the other. It is easy to imagine the seals on the Farnes bobbing along to listen to St Cuthbert’s spiritual advice.
Posted by Elaine Housby