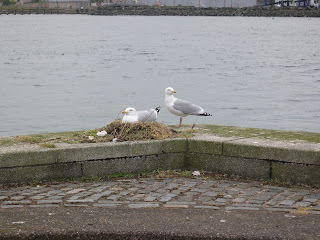 It’s that time of year again in Berwick. The time when the seagulls are busy producing baby seagulls. The mating, nesting, breeding season. Whatever you want to call it, it means the season when they never stop screeching by day or by night. For seagulls any man-made structure near the water is just another cliff. All three bridges and any house within striking distance of the estuary are in a bird’s eye view handy nesting sites thoughtfully provided by humans. I know I’m very lucky to live beside the sea. But when I lie awake at 3 am listening to the ceaseless shrieking of the gulls circling around my roof, I sometimes wish I didn’t. When I do go inland for the day, I find myself wondering what that strange silence is. Isn’t there something missing?


Checking out the online reviews of local tourist accommodation, I noticed that complaints about the noise of the seagulls feature regularly. Quite what the unhappy visitors expect the hotel proprietors to do about this is not clear. Go out and shoot the gulls, perhaps? Some locals have been known to do this but when undertaken by amateurs it is illegal. According to the strict letter of the law, as interpreted by the wildlife columnist of the Berwick Advertiser, destroying nests is also forbidden except where the nest is causing serious inconvenience which the property owner cannot reasonably be expected to tolerate. This is a loophole into which many nests have disappeared. The photo here was taken two years ago and the nest shown was destroyed soon after by persons unknown. Since this particular pair had chosen to set up home right on the harbour wall, a most ridiculously unsuitable place, it is likely that their removal was officially sanctioned.

Before you judge Berwickers too harshly for this, let me tell you that sentimentality about seabirds does not long survive living in close proximity to gulls. Their behaviour has convinced me that Michael Crichton was right in his Jurassic Park speculation that birds evolved from velociraptors. They have no fear of humans at all and are absolutely ruthless in their pursuit of food. Someone I know claims that a seagull mugged him for his cornish pasty. I was once mobbed by gulls while ill-advisedly eating chips on a bench beside the river, to the point where I dropped the box and fled. I have seen gulls swooping on leftovers on plates at outdoor cafe tables. And I thought myself lucky that they’d allowed me to finish what I wanted first.

Needless to say, all this indiscriminate consumption of food that neither birds nor velociraptors evolved to eat leads to messy excretions. The subject of seagull droppings rouses Berwickers to frenzies of loathing. Cars cannot be kept clean, neither can windows. The gulls like to amuse themselves by waiting until the window cleaner has finished his round before circling back to target the sparkling panes. Last summer I allowed myself to be lured by an attractive view into forgetting one of the elementary rules of life in Berwick: never stand still underneath any object on which a seagull is able to perch. The result was that I had to return home with undignified haste and put all my outer clothing straight in the washing machine.

Most bizarrely of all, my first attempt to decorate the window sill of my new home with a vase of flowers resulted in a gull taking up residence on the outer sill and pecking persistently and noisily at the glass. The look in its eye was chilling. The eventual shattering of the glass seemed inevitable. I surmised that it had been attracted by the sight of flowers which it viewed as useful nesting material, and removed the vase to the far side of the room. This seemed to do the trick; at any rate the gull departed. Since then no vegetable matter of any kind has been visible in my windows during the spring. But I still wouldn’t be surprised to see a crowd of gulls crashing into my bedroom in a Hitchcockian bid for final supremacy.
Posted by Elaine Housby