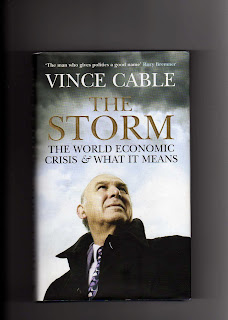 Last Saturday afternoon I was strolling around Berwick when a man who looked vaguely familiar walked out of the church hall and across the car park. Could it be ... surely not ... yes!  It's Vince Cable!  The finance spokesman for the Liberal Democrats, a highly placed cog in the coalition government in Westminster, walking round the streets at this far end of England just like a regular guy! I didn't want to behave like a 'pap' so I can't bring you a photo of this memorable sight. I also managed to restrain myself from running across the road to tell him that I've read his book and think it's pretty good, but as for the naff cover picture, really, what was he thinking?

I'd already got an inkling of the seriousness with which the Liberal Democrats were taking the elections to Northumberland County Council (no elections in Scotland this time) from the fact that my mail box was so stuffed with their electoral leaflets that there was hardly any room left for real letters. Spotting Mr Cable was an indicator of a whole new level of seriousness. And subsequently finding out that Nick Clegg, the party leader, was in Berwick at the same time ... well, that made me reflect that I haven't seen any party machine put this much effort into an election in North Northumberland since 1979. I should point out that I haven't been living in the area continuously since the 1970s so I've missed a few elections, but in my personal recollection I haven't felt this courted by a party since the local Liberals successfully resisted the national swing to the Conservatives in the general election which made Margaret Thatcher Prime Minister.  Yes, I was very young in those days, thank you for your astonishment. 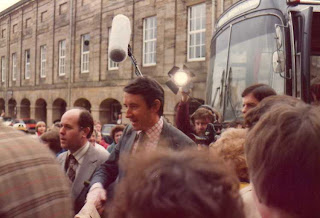 Apparently at that age I had no scruples about behaving like the paparazzi - possibly because the term had not yet been invented - and I was very proud of this snap of David Steel, then party leader of the Liberals, descending from his Battle Bus in Alnwick market place, pursued it seems by a TV sound man. For the benefit of overseas and younger readers I should explain that in the 1980s the Liberals merged with a short-lived political experiment called the Social Democratic Party and gained nothing much except a cumbersome new name. The building in the background is the Northumberland Hall, an 18th century assembly rooms, now much favoured for coffee mornings. In the 1970s it was even rarer for highly placed politicians to travel so far from London than it is now, and local excitement at this visit was intense. Though to be fair, I seem to remember that the Conservatives fought back by despatching William Whitelaw northwards. 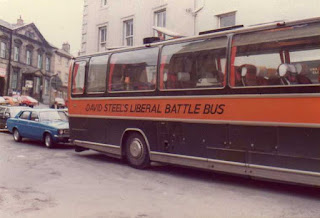 A real piece of Seventies retro, isn't it? That shade of orange hasn't been in fashion since. The Liberal Democrat party colour now is plain old yellow -possibly because they don't want to be mistaken for partisans of the Northern Irish Unionist cause, which nowadays would be a distinctly unwelcome form of confusion here on the English-Scottish border.

Alan Beith is the Liberal Democrat MP for the Berwick upon Tweed constituency, which includes Alnwick - it's the largest constituency by area in England, because the population here is so sparse. He's been our MP continuously since 1973, since the downfall of Lord Lambton, the previous incumbent, which I mentioned in a previous post (here). He works very hard for the area and people here tend to prioritise that over party policies. Unfortunately for them, everything they could throw at it was not enough for the LibDems to hold on to Northumberland County Council. They lost overall control to Labour. UKIP did not field any candidates up here. When they do, that really will be, in the term now being bandied about, a game-changer.
Posted by Elaine Housby