A Wartime Plane Crash in the Cheviots 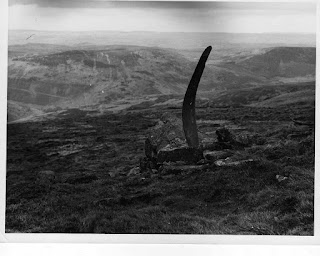 This is a photo of a memorial erected in a lonely spot in the Cheviot hills in 1968 by an Alnwick boys' club to the memory of the American airmen who died when their plane crashed in that place. My late father helped out with the club and his photos and other records of the unveiling of this memorial are now in my possession. This picture gives a good sense of the bleakness and wildness of these hills, which straddle the English-Scottish border. It is easy to understand why quite a number of Allied aircraft crashed into them - flying with primitive instruments, disorientated by bad weather, exhausted and nerve-frayed by repeated missions. 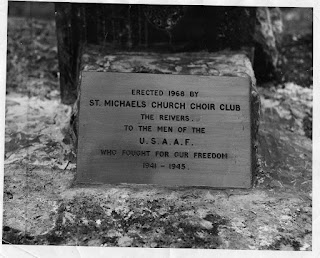 In recent years the subject of plane crashes in the Cheviots has attracted considerable attention and at least one book has been published on the subject. There is now a rather grander memorial to all the wartime flyers who died in the hills. Back in 1968 though nothing much had been done in that way and the Reivers Club of Alnwick were pioneers. While exploring the area they found traces of the wreckage of a plane, dug up the rest of it, investigated the story behind the crash and decided to set up the plane's broken and bent propeller as a memorial. This involved hauling bags of cement for 1,300 feet uphill from the nearest road. Try getting young people today to do that.

The propeller came from a Flying Fortress which crashed in December 1944 while returning from a bombing mission over Germany which was aborted because of fog. The pilot was flying in white-out blizzard conditions, following a weak direction signal to their home base in Cambridgeshire, when the side of a hill suddenly loomed in front of him. Two members of the crew died on impact. The seven survivors made haste to abandon the plane, mindful that it was still carrying a full load of bombs which could explode at any minute. They became separated in the fog. Three of them managed to reach a farmhouse, where they narrowly escaped being shot by the occupants, who thought they were Germans. Once he realised his mistake the farmer lent his motorbike to one of the Americans and he was able to drive to the nearest town and arrange for an ambulance to take them all to the RAF hospital near Berwick. The other four fliers, more badly hurt, had taken shelter from the storm as best they could on the exposed hillside by crawling into a ditch and wrapping themselves in a parachute. They were discovered by a collie dog called Sheila who belonged to two local shepherds who had heard the crash and gone out to search for survivors. The shepherds helped the airmen to the home of one of them and his wife tended to their injuries while his daughter walked several miles in the blizzard to reach a telephone and summon the RAF ambulance. In the 1940s ordinary people did not have phones - indeed they were still not that common in Northumberland in the 1960s. 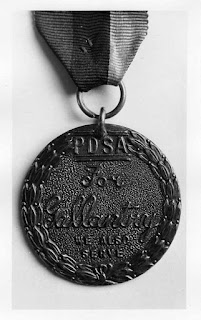 The story of how the four men's lives were saved by a sheepdog captured the imagination of the public on both sides of the Atlantic and Sheila became the only 'civilian' dog during the war to be awarded a special animal medal, shown here.The two shepherds were also given medals, but the public was much less interested in that.

The PR potential of the story was recognised by the Honeywell company when the boys sent it a switch of its manufacture that they had found among the wreckage of the plane, which after more than twenty years buried in English mud still worked. The company arranged for the memorial to be unveiled in a state-of-the-art transatlantic ceremony. The son of one of the crew members who had died pressed this switch, suitably restored, in New York and a cover in the colours of the USAAF fell off the memorial in the heart of the remote Cheviot hills. This necessitated laying several miles of cable. A bunch of notables in the States made speeches praising the efforts of the local Brits in aiding American fighters during the war and commemorating them now. In the days before the internet it must have been quite something for a group of young lads from Northumberland to introduce themselves to a couple of US generals speaking live from New York. Here is the timetable for the event. My father once remarked on how pleased he was with his photo of the fly-past, but sadly I haven't been able to find it. 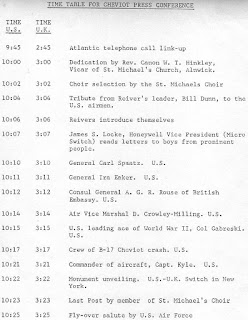 P.S.  I have now given these papers and photos to the local archives in Berwick, so if you want to see them, call in and ask Linda, the ever helpful archivist.
Posted by Elaine Housby