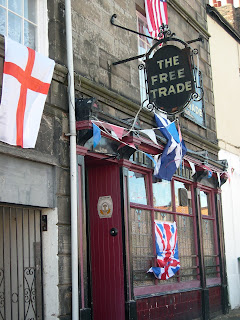 This is The Free Trade pub in Berwick.  The photo was taken at the time when it was hanging out the flags for the 'Jubilympics'. A man from CAMRA, the Campaign for Real Ale, recently gave a talk here and told us that this is the only pub in Berwick that's on their list of historic pub interiors that ought to be preserved. I'm not much of a pub-goer myself and I'm afraid I've never been inside it.  But the artist Brita Granstrom has, and below are her paintings of Brenda the landlady at work.

I have never heard anybody comment on the significance of the name The Free Trade. I shouldn't think its regulars spend much time discussing the finer points of the history of economic ideas. But the name itself is a real period piece, preserving the memory of the bitter 19th century debates over protectionism versus free trade which culminated with the triumph of the latter and the abolition of the 'corn laws', resulting in cheaper food for the masses.


A great deal of nostalgia seems to be attached to old pubs and that goes for their names as well. One of the oldest pubs in Alnwick was called the Black Swan. Allegedly Robert Burns once stayed there on a trip south of the border in the course of his duties as an excise officer. So when in 2001 it was taken over by a chain who decided to modernise it in order to attract a younger clientele, there was quite a kerfuffle. There was an even bigger kerfuffle when it was announced that its name was being changed to The Hairy Lemon. The local council was concerned that this moniker might have an obscene reference. The reports of their deliberations, during which nobody ever dared to say exactly what they thought the hairy lemon shaped object referenced might be, were small masterpieces of unintentional comedy. Alas, they failed to make a case for forbidding the name change on grounds of decency and it went through.  But even this was not enough to make the pub viable during the present gloomy times for traditional pubs, and in 2012 it closed down, taking both its names into history.

EDIT  Just discovered that this pub has now re-opened under its original name of the Black Swan. Hoorah! 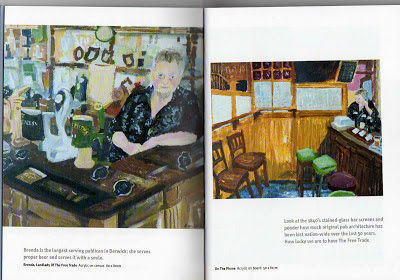