The Northumbrian Origins of a Great American Institution 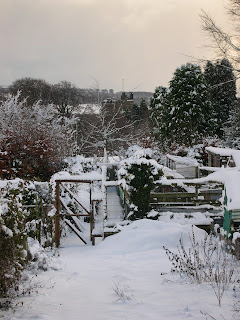 I had vowed that no picture of Alnwick Castle would ever appear on this blog. The Percy family's highly efficient PR operation does not need any help from me, and I would rather spread the word about the lesser known aspects of life in Northumberland. However, this post really does need to be illustrated by a picture of the ancestral home of the Percys, so I have compromised. Rather than the standard tourist view of the Castle from the northern approach to the town, pretentiously known as 'the Canaletto view' because the artist of that name once painted it, I bring you a photo taken one wintry day from a freezing council allotment with the back side of the Castle just visible in the distance. This seems appropriate to my subject.

The Smithsonian Institution, the world renowned group of museums and research institutes in Washington D.C., was founded by James Smithson, who was an illegitimate son of a Duke of Northumberland. The Smithsonian's own website includes a full account of the origins of both James and his foundation. And one of its staff, Heather Ewing, has written a whole biography of Smithson which includes an account of his Percy paternity and his possible bitterness about his neglect by his natural father.

The story is remarkably little known in the area the Dukes call home. I grew up in Alnwick and I was unaware of it until I read it in The Encyclopedia of North-East England, an invaluable tome produced a few years ago by Professor Richard Lomas.  Reeling with disbelief, I looked it up in a few other places and discovered that it seems to be known everywhere in the world except North Northumberland. I'm not sure why Alnwick Castle's publicity machine does not make more use of this story, as it is normally very keen to work any American angle on its history to pull in more free-spending American tourists. Is the family still embarrassed about it after all this time?

James was born to Elizabeth Macie in Paris in the middle of the 18th century and initially took his mother's surname. His father was the 1st Duke of Northumberland, born Hugh Smithson, who changed his surname to Percy after he married into the family and was later bumped up the aristocratic ladder to a dukedom by a government that needed his vote. In adult life James changed his surname at the request of his mother, who seems to have kept trying to get his father to take some notice of him. Despite never having set foot in the United States James left all his wealth to the government of that country to be used for educational purposes, motivated it seems by sympathy with the egalitarian and anti-aristocratic ideals of the USA. He wanted to make his own name more famous than that of the Percys, and he succeeded in that in the most satisfying way. Personally I would be even happier about it if he had immortalised the name of his mother instead, but then it was she who wanted him to change his name. (And anyway, isn't Macy's a department store? That might have been confusing.)

I was already planning to write a blog post on this subject when I heard an item on the PM programme about a proposal to introduce gender equality in the peerage. Now that the royal family have decreed that Kate's baby will be first in line of succession to the throne regardless of sex, some radical peer was earnestly telling Radio 4 that inheritance of aristocratic titles should now also pass to the first born, boy or girl. I think this is the biggest piece of humbug I've ever heard on PM, and that's saying something. What about the gross inequalities of wealth and power passed simply by birth - legitimate birth only - down to the umpteenth generation of descendants of those who managed to blag a peerage a few centuries back? Are we actually going to care less about this if the wealth and power is being enjoyed by a woman? Give me a break.