'A Deep Dive Into Uncharted Waters' 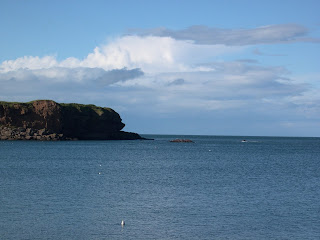 Yesterday the Chancellor of the Exchequer delivered a speech about the possible monetary arrangements of Scotland after independence, which he referred to as 'a very deep dive into uncharted waters'.  So here is - ta da! - a picture of some deep waters. Off Eyemouth, a few miles north of the border. I have written before (here) about Scottish bank notes and the possibility of re-introducing a separate Scottish currency, and also (here) about Eyemouth's history as a centre of cross border smuggling. That was a while ago though, and it seems like time to revisit these topics. 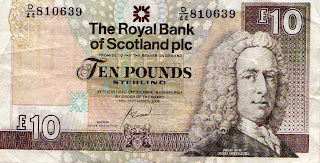 There are some serious economists in Scotland working on post-independence financial matters, and whenever they emerge blinking into the light of a television studio the whole project sounds more workable, but First Minister Salmond himself has a tendency to dismiss legitimate questions with airy references to 'scaremongering' and how much England needs Scotland's oil. 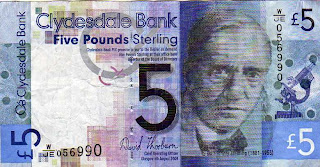 The Scottish banknotes shown here differ only in design from English ones, they are still the same currency - sterling. Now that joining the euro zone looks distinctly unattractive, the plan is for an independent Scotland to retain sterling, but in that case how independent could its economy really be? This is the question the Chancellor was raising yesterday, and, though it pains me greatly to concede that George Osborne could ever be right about anything, he does have a point. His other line of attack, that England would not allow Scotland to keep sterling, really is just scaremongering. Trust me on this, I'm a Borderer.

Some of the most enthusiastic nationalists would like to revert to an independent Scottish currency, which does not have a great historical track record. By the 18th century the value of the 'pound Scots' was so much less than that of the English pound that some Scottish merchants refused to accept it and English notes increasingly circulated north of the border. It's true that was long before oil was found in the North Sea, so maybe things would be different this time round. In theory the residents of Berwick and Eyemouth would be facing the prospect of having to carry two separate wallets around with them every day as they commute across the border to work and shop, but in practice we can safely say that shops close to the border would accept both currencies. And of course there's always plastic - though you really wouldn't want to have to pay your bank's foreign transaction fee every time you nip out for a sandwich. The glory days of Eyemouth and Berwick as centres of smuggling and cross border profiteering would then return. I imagine that organised crime is already renting the warehouses for when Scotland introduces taxation that differs from England on alcohol, cigarettes, or anything else.

Even without a separate currency, it is certain that we will see 'benefit tourism' if Scotland maintains more generous social welfare provision than England - some older people in the Borders are already moving a few miles north in order to qualify for free nursing home care. If Scotland funds this generous provision by raising income tax we will also see some working people moving south. This movement of payers out of and beneficiaries into an independent Scotland could put a great strain on the new state, and so long as it remains within the European Union it cannot do anything to stop this migration.  And it's us here right on the border who will see the most population movement. Granny in Scotland, the weans in England, seems the likely future.
Posted by Elaine Housby