Mythical Water Beasts and the Downfall of an MP 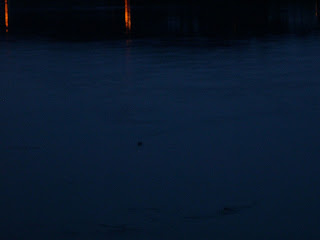 I've used this rubbish photo of a seal before to illustrate the difficulty of getting good photos of seals, but I'm now really wishing I'd saved it for this post, which is inspired by a book I've just read about the Loch Ness Monster. Since I've been living beside the estuary of the river Tweed I am far more sympathetic to those who sincerely believe they have seen an unknown beast in Loch Ness. Please note, I do not say that I am more inclined to believe in the existence of a large animal unknown to science, which seems to me unlikely for a number of reasons, but I completely understand why you might think you've seen one. In  a large body of water with constantly changing effects of light, shadow and reflection, it is remarkably difficult to tell the difference between a seal and a shag (a black water bird related to the cormorant which paddles very low in the water and dives for fish) and sometimes even between a seal and a log of wood, unless the 'log' suddenly dives. In such a vast body of water as Loch Ness it must be even harder to be sure what that moving black blob really is.

Rab Houston says in his most useful book Scotland: A very short introduction that Nessie was originally simply an example of a 'kelpie', a kind of malignant water spirit  that features in Celtic mythology. This seems to be borne out by the fact that the earliest reported sighting of Nessie is associated with St Columba. The monster tried to drag a man into the water but was driven back by the Christian power of the saint, which is exactly what you would expect of a kelpie. Some versions of the story say that the man got into trouble as a result of skiving off for a swim when he was supposed to be listening to Columba's sermon. The motif of a pre-Christian spirit punishing a man for failing in Christian observance reminded me strongly of the story of the Lambton Worm. This is a story from County Durham, which is a bit too far south to qualify as Debatable Land, but one of the Lord Lambtons was the MP for the constituency of Berwick upon Tweed. I've taken the story here from Folk Tales of the North Country but I've known it since childhood.

The young heir to Lambton Castle was, we are told, 'a wild and rebellious youth' who had no patience with his duties and cared only for pleasure. He took this to the shocking extreme of going fishing on a Sunday when he ought to have been at church. For this sin he was punished by catching a nasty looking aquatic creature instead of a fish. He threw it down a well and forgot about it and subsequently went off to serve as a soldier in foreign parts. While he was away the creature grew into 'a monstrous worm', climbed out of the well, wrapped itself round the hill on which the castle was built, continued to grow and terrorised the country for miles around, being pacified only by having the milk of nine cows delivered to it every day. Eventually the young heir, now older and wiser, returned home, was appalled by what he found and went to consult a convenient local witch about how to kill the worm. She told him not to challenge it on land but to stand on a rock in the middle of the river Wear so that when he cut it into pieces with his sword they would be swept away by the water and would not be able to join up again and come back to life, as the creature had done before. This trick seems to involve shifting the mysterious power of water away from the creature to the benefit of the human. It worked and the monster was soon no more. The sting in the tail is that the witch had told young Lambton that if he succeeded in slaying it he must kill the first living thing he saw on the way home - another common motif in folk tales. He had told his aged father to stay well out of the way and release a hound as soon as he heard his son blow his horn to signal the death of the monster. But the old man was so overcome with joy that he could not restrain himself from running out to greet his son. The son could not bring himself to kill his father and killed a hound instead, but because he had thus dodged the condition a continuing curse fell on him and all his heirs.

The story relates that for nine generations no Lord of Lambton ever died in his bed. It does seem to be the case that the Lambtons had a habit of coming to unfortunate ends, though their rate of death in battle may be no higher than the average for the aristocracy. In recent times the political career of one Viscount Lambton did, as it were, die in bed. His stint as MP for Berwick was abruptly terminated in 1973 when photos of his activities with several prostitutes were sent to the press. As MP for our constituency he had been scheduled to speak to my school a couple of weeks later but the invitation was speedily withdrawn, since, as my father memorably remarked at the time, he was 'definitely not the kind of man we want to come and talk to young girls'. That Lambton had in fact renounced his title in order to be able to continue as a member of the House of Commons, but he apparently insisted on being addressed as Lord anyway. He sounds like a true heir of the young Lambton who brought down the curse of the worm.
Posted by Elaine Housby