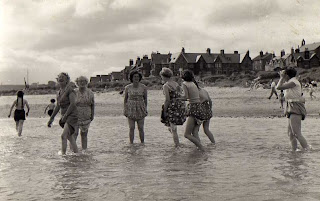 This post exists purely and shamelessly as as way of sharing these great photos with the world. The blog description above does say that it includes 'the merely entertaining'. And the photo on the left is just too entertaining to keep to myself! I've been sorting through some boxes of Inherited Stuff, which is a tedious, finicky and emotionally draining business, but every now and then you are rewarded with a find like this.

I'm fairly sure that this photo was taken at Alnmouth, a village on the coast of North Northumberland. It is only a few miles from Alnwick and has the distinction of having its own railway station on the main East Coast line because although the line was intended to go to Alnwick the Duke of Northumberland of the day refused to allow the nasty thing anywhere near him. So ever since travellers to Alnwick have had to negotiate a hopelessly inadequate bus service from the end of the road where the station is located - which is, if you are being really pedantic, not even in the village of Alnmouth but in a tiny cluster of houses called Hipsburn.

One of the ladies enjoying a paddle, or 'plodging' in the local vernacular, is my grandmother and the others are presumably her best mates. There is no date on the photo but judging by the dress styles and by my grandmother's age I would put it sometime in the 1950s. 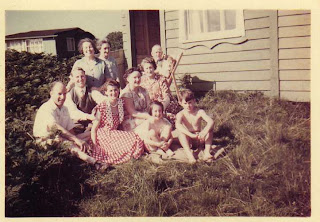 This second photo is helpfully dated by the processor 'February 1957', but since nobody sits on the Northumbrian coast in a sleeveless dress in February I reckon it had been sitting in the camera since the previous summer. It shows my other grandmother and her family and friends outside my grandparents' beach hut, which was located at a place known locally as Seton Point, just a few miles along from Alnmouth. This hut stayed in the family for another twenty years, by which time it had become a museum of 1950s artefacts covered in sand. Sadly I was too young to have any say in what became of it - if I'd had the chance to keep it I would probably be living in it right now.