Our Enduring Links With Scandinavia 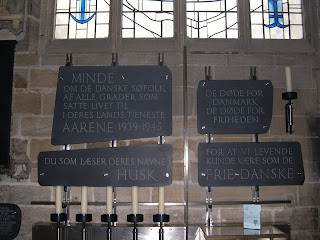 I have written a couple of times before about the close links between this area and Scandinavia and those posts have been quite popular, so I thought I'd go back to that subject. This is a picture of the memorial to Danish seamen who were based in Britain during World War II which has been placed in the Cathedral of St Nicholas in Newcastle-upon-Tyne. It was originally located in the Danish church in London, but when that closed down Newcastle cathedral felt that it was the most appropriate permanent home for it, because most of the Danish sailors it honours were based in the ports of Tyneside.

An English translation of the inscription is provided on the small plaque just visible on the left. It says: 'A memorial to the Danish seamen of all ranks who gave their lives in the service of their country during the years 1939-1945. As you read these names, remember. They died for Denmark, they died for freedom, so that we like they might live as free Danes.'

I love this memorial to the wider community of the North Sea. The most important reason for the north-south divide in England is that historically the south of England has been oriented to the Channel and the Mediterranean, to France and southern Europe, while the north of England has been oriented to the North Sea and the Baltic, to Scandinavia and Germany. This extends to the accents and dialects of northern England and southern Scotland, which are closely related to the languages of Scandinavia. Until very recently the British education system paid no attention to this and treated them simply as deviant and defective forms of speech which should be eliminated. I am really hoping that the present popularity of so-called Scandi-crime on television, and even more so the huge popularity among the opinion-forming class of Borgen, a Danish political drama about the trials of a liberal woman prime minister, may lead to a greater appreciation of our indigenous inheritance from Scandinavia.

One of the best known features of the speech of north-east England is the use of 'wor' where standard English has 'our'. This is held in such affection by native speakers that even some people educated to degree level will use it in certain situations. A light went on in my head when I heard someone on the radio explaining that March 25th is celebrated in Sweden as Waffle Day and that Waffle is a pun on the Swedish for Our Lady, which is Var Fru. Even back when I was at school, my German teacher commented that students with a strong local accent could acquire a decent German accent more easily than those down south who spoke posh, but that this was not reflected in any of the teaching materials.

So I am very happy to say that the theme of the Berwick film festival 2013 will be exactly this: the cultural connections between this area and the lands of northern Europe across the North Sea. Look it up here.
Posted by Elaine Housby