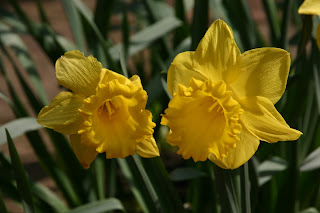 A very happy Easter to all my readers. On this holiday weekend I am reduced to showing you photos of flowers taken a few years ago, because not a daffodil or forsythia blossom is to be seen in the Borders at the moment. This is partly because Easter is quite early this year and partly because this spring has been exceptionally cold. As I celebrate the first anniversary of this blog, I have realised that it has coincided with the worst period of prolonged bad weather in living memory. A radio presenter the other day referred to 'our fifteen month winter' and that's about right. So the pics are here to symbolise spring, new life and new beginnings, rather than to represent the reality outside my window. I've known it warmer at Christmas. Seriously. 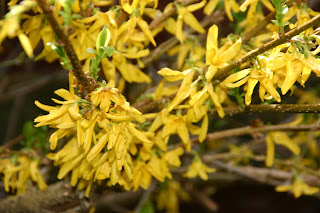 Yesterday I found a dead puffin on the slipway at Tweedmouth, but I felt you wouldn't want to see a photo of that. The Farne Islands rangers, whose blog is linked to in the sidebar, have been reporting worryingly large numbers of dead birds washed up all along the east coast. They were hit by a very unusual spell of bitter cold and high winds just as they were beginning to return to the Islands to breed. This is one of the years they take a 'puffin census' so in a few months time we'll know how badly the population has been affected.

Since it fits in with both the theme of new beginnings and the anniversary of my blog, I want to acknowledge the announcement of the date for the referendum on Scottish independence. It is now fixed for Thursday 18th September 2014. All elections and referendums in the UK are held on Thursday, even though this has not made any sense since 1832 when the franchise began to be extended to people who have to work for a living. Maybe an independent Scotland would hold its votes on a Saturday, wouldn't that be exciting. Anyone who is following the independence debate seriously may be interested in these two articles, one on the widespread sentiment that Scotland has a different political culture from England, here, and one on the surprisingly large difference in the attitudes of men and women to independence, here.  Whatever happens in the next two years, I'll still be here, giving the view from the border.
Posted by Elaine Housby