Local Food for Local People? No, not really. 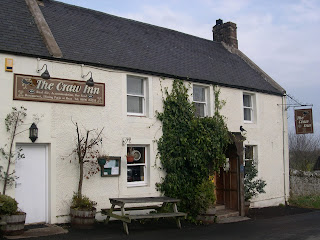 This is the Craw Inn in Auchencrow, a very small village or possibly hamlet in the Scottish Borders, about half an hour's drive from Berwick. It is near Reston and I ended up there while trying to track down the old school in Reston, as mentioned in a previous post. It is one of those places which started off as a traditional village pub and still calls itself a pub but is in fact now essentially a posh restaurant and mini-hotel. When I found that the pub in Reston had closed down many months earlier and just hadn't bothered to take down the large sign at the entrance to the village advertising its menu, a friendly bus driver deposited me at the Craw Inn. This experience took place a few weeks before I started this blog and was in fact what finally prompted me to start it, because it brought home to me the weirdness of some aspects of life in the Borders.

I still plan to do a post called By Bus Round the Borders detailing the trials of being reliant on public transport in such a sparsely populated area, but I feel silly taking photos of buses. In addition to being a non-driver I am a non-foodie, which can also make life in the Borders difficult. Personally I can't see the point of driving miles around empty countryside just to get to a remote outpost of culinary sophistication, and I also dislike the way that driving under the influence of alcohol is in consequence a way of life in rural areas. The trick is to stay just below the limit. Every week there are reports in the local papers of people who haven't quite managed it. And losing your licence is a very serious matter in the Borders. It could mean that you can't get to your job. It could even mean that you have to live like me, and I don't think that the customers of the Craw Inn would be very happy about that.

When I was in there wasn't a Scottish accent to be heard in the place, but it seems that even being English does not confer enough cultural distinction on some residents of the Scottish Borders. The next time I came across the name of Auchencrow was when I saw a poster advertising their village jumble sale. Except they didn't call it a jumble sale or a car-boot sale, they called it a vide grenier. I did a double-take when I saw this. Later I checked with a native French speaker and he confirmed that vide grenier means literally 'empty attic' and is the French version of a jumble or car-boot sale. Just how posh do you need to be to feel that the only way you can contemplate buying anything second-hand is if the sale has been given a French name? But I suppose it fits in with the assiette de fruits de mer in the local restaurant.

To me this illustrates some of the paradoxes of the whole 'buy local' agenda which is so powerful now. Oysters were a common food of the poor in coastal areas in the past - when I went excavating for old bottles in the abandoned rubbish tip in Alnwick I found lots of oyster shells. But ordinary people certainly aren't eating oysters any more. The shellfish may be caught locally but it's turned into dishes that are given French names, sold at luxury prices and eaten by people with non-local accents who got there by driving nice cars. Many of the people whose ancestors have lived in this area for generations can't afford to eat in places like that. Sometimes they can't afford to run a car, so their experience of the place they live is truly local, intensely concrete and limited, in a way that those who make so much of local community, traditions and food barely understand.
Posted by Elaine Housby