Richard III is welcome in our car park 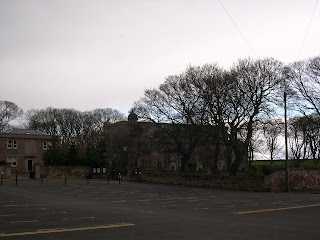 Like many people I have followed the events surrounding the excavation of the grave of Richard III under a car park with great interest, but I never expected that they would have any relevance to Berwick. Then this week a letter appeared in the Berwick Advertiser from one CW Ross arguing that the late king ought to be ceremonially re-buried neither in Leicester, where he died, nor in York, where he lived, but here in Berwick, because he was responsible for the town's final capture for the English, 'routing the Scots in the process'. Well, that sent me straight back to the history books.

As previously explained in this blog, the town of Berwick upon Tweed has changed hands between Scotland and England many times but the last time was in 1482 and since then it has been under English control. The victory of 1482 is conventionally attributed to King Edward IV. But maybe it's true that a lot of the hard graft was performed by the king's younger brother, Richard, Duke of Gloucester, who later succeeded him to the throne and became Richard III. It does fit with the reports of Richard's skill and courage on the battlefield which were quoted by the historians investigating his grave.

I imagine that Mr or Ms Ross had his or her tongue firmly in his or her cheek, and there is of course no possibility of anyone taking the suggestion of this letter writer seriously. Staging a triumphalist ceremony to honour the man responsible for vanquishing an army of Scotland and seizing a chunk of its territory might upset the Scots of today just ever so slightly. I can almost see Alex Salmond quivering with rage on Newsnight. There have been other battles between England and Scotland since then, notably the epic tragedy of Flodden in 1513. As the heritage industry gears up to cash in on - sorry, respectfully observe - the 500th anniversary of Flodden, studied neutrality between the parties is the order of the day. The official memorial on Flodden Field is inscribed 'to the brave of both nations', and quite right too.

I was initially stumped about what photo would be a suitable accompaniment to this post, but finally decided that a view including both the parish church and a car park would hit the right note. It occurs to me that if any archaeologist wanted to dig up a car park in Berwick the overwhelming response from the residents would be outrage at the loss of parking spaces. The typical Berwicker appears to believe that there can never be too many parking spaces. They must be free, they must be right outside wherever you want to go whenever you want to go there, and the best use that could be made of any empty building would be to knock it down to create lots more lovely parking spaces. There was a great piece in the New Yorker magazine a couple of weeks ago, written in the style of a Shakespearian tragedy and having fun with the idea that Richard was killed in a fight over a parking space because the markings on his horse clearly showed that it was only entitled to be stationary there during certain hours 'which are not now'. I can see that happening in Berwick. I can absolutely see it.
Posted by Elaine Housby