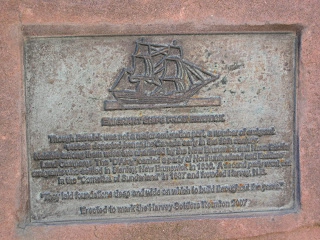 I've written a bit recently about immigration into the Borders, so I thought this week I would look at the other side of the coin and write something about emigration from the Borders. This is a plaque on the wall of the old chandlery building on Berwick quayside. Sorry it's not all that legible. It was erected to mark a visit in 2007 by some residents of a town called Harvey in New Brunswick, Canada, which was founded by emigrants from Berwick. As this inscription states, Berwick itself was never a major port of emigration, but a few ships sailed from here to Canada bearing settlers. 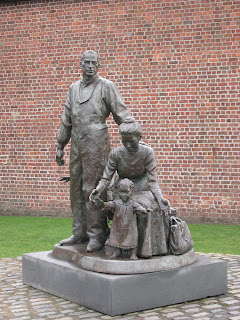 Emigrants mostly sailed from large ports on the west coast such as Liverpool, where this memorial sculpture of an emigrant family is located. The Borders area experienced substantial population loss due to emigration, a fact which is only just beginning to attract proportionate attention from historical researchers. Life here has always been hard, and in the 19th century it was sometimes so hard that even a journey of many months to the other side of the world seemed like a worthwhile risk. I have visited the Maritime Museum in Auckland, New Zealand, which has a reconstruction of a 19th century emigrant ship, complete with a floor which cunningly moves as if it were being tossed about on the sea. I was glad to get out of there after ten minutes, and what it was like after dozens of seasick families had been crammed in there for weeks on end, doesn't really bear thinking about.

I have relatives in Auckland, descended from settlers who left Britain in the first half of the 20th century, by when the journey was somewhat more civilised. Big shout-out to Pearl and all her family if they're reading this. Pearl's father had the same surname as me. He and his brothers emigrated from Alnwick, a town about thirty miles south of the border, leaving their sisters behind to take care of their parents.This kind of brutal family rupture must have been quite common. Her mother's family came from Cockburnspath, a tiny place a few miles north of the border. This cross-border couple are responsible for a batch of flourishing great-grandchildren whose notable talents are being devoted to building the great country of New Zealand rather than to realising the full potential of the English-Scottish Borders. 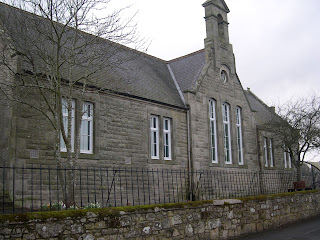 Pearl in Auckland has a framed sampler on the wall which says it was made at Reston school in the 1880s. One day about a year ago I set out to locate the school in Reston, a village close to Cockburnspath. This is it. I looked forward to delighting the Kiwi end of the family with a picture of the very building their sampler was made in. Sadly however a close examination of the date on the school revealed that it was built later than the date on the sampler. The young embroiderer must have attended an earlier establishment, possibly a makeshift school in a residential house. I hope to find out more about this one day.The important point is that the craft work of a ten year old girl in the Scottish Borders has been treasured for more than a century in New Zealand,  the country to which her family were driven by the hardship of an agricultural labourer's life.
Posted by Elaine Housby