Read Not Quite All About It 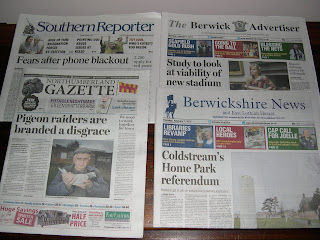 Today I sold my old tumble dryer to a young couple from Duns, a small town just over the border. I'd advertised the dryer in the Superbuys small ads of the Berwick Advertiser. They had seen the ad in the Berwickshire News. The young couple paid me with a pocketful of crumpled Scottish notes and took the dryer off to its new life north of the border.

This got me thinking that it might be interesting to write about the situation with local papers here in the Debatable Land. It sometimes seems that the number of newspapers with which we are blessed is inversely related to the amount of news that happens around here. If you want to keep abreast of all aspects of life in North Northumberland and the Scottish Borders you are obliged to buy four different papers at a total cost of £3.30 per week (though of course they're all anxious to tell us that it's much cheaper if you subscribe), which may shock Londoners who can get away with buying one paper covering their own borough, which probably has a population larger than that of the whole area covered by these four. Three of these papers are produced by the same company, the Tweeddale Press, but they evidently do not feel able to contemplate a cross-border merger.

The town of Berwick has been artificially separated by the border from the county of Berwickshire and therefore has a whole paper all to itself, which quite frankly struggles to find enough of interest to fill it some weeks. The lifestyle and general interest features, as well as the ads, are shared with the Berwickshire paper. Every now and then the printers muddle up some of the news pages and readers in Berwick are informed about events in Duns or Dunbar for a change.

The Southern Reporter has a more ambitious remit, covering the whole of the western end of the Scottish Borders local authority area, including the towns of Kelso, Galashiels and Jedburgh. Readers in the south of England may need to be reminded that 'southern' in this context means the south of Scotland. I used to love the masthead of the Southern when it included an impressively long list of all the papers founded in the 19th century which it has absorbed over the years and also the motto 'Leal to the Border'. Both of these have now gone. I would like to think that this is due only to lack of space and not because it has become politically inexpedient to be leal (loyal) to the Borders area rather than to the whole country of which the border is the southern limit.

The Northumberland Gazette is presumptuously titled because it actually only covers Alnwick. Once you get more than ten miles south of Alnwick you start getting into the territory of the Morpeth Herald. The Gazette would probably justify its title by affirming that it is the county town of Northumberland. Alnwick has waged an interminable battle with Morpeth over which of them should rightfully bear the title of county town, which stopped just short of defacing signboards.

Belford, Seahouses and Wooler are located in the area where the coverage of the Northumberland Gazette and the Berwick Advertiser overlaps, and therefore we are all exceptionally well informed about everything that goes on in these three very small and not all that eventful towns.

Readers may also be interested to know that there are two editions of the Radio Times on sale in Berwick. (For overseas readers: despite the name the Radio Times is the biggest selling television listings magazine. It was founded before television was invented. Yes, really.) One edition covers north-east England, the other covers Scotland. All of the 'nations and regions of the UK', as the BBC refers to them, have their own local programmes in certain slots, and Scotland has some Gaelic language programming. The Berwick branch of WH Smith thoughtfully places the English and Scottish editions in separate racks, for the convenience of its cross-border clientele. But if like me you tend to put off buying the listings magazine until the weekend you usually have to take whichever version hasn't sold out and then try and work out what's actually on the telly tonight in the slot where the magazine says it's something in Gaelic. And if snow has stopped delivery lorries from one depot getting through, heaven only knows what Smiths will have on the shelves.

You can see that the Gazette is the only one of the four papers to have gone tabloid so far, but  the Tweeddale Press has just announced that its papers are going 'compact' too, so my photo has preserved a little piece of history!
Posted by Elaine Housby