What Exactly Does the SDL Think It's Defending in Berwick? 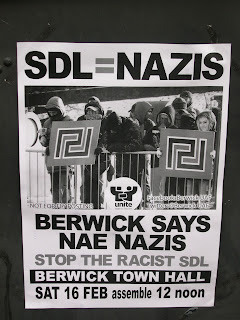 I've just got back from a satisfying couple of hours spent joining in a demo in the centre of Berwick to protest against a march by the Scottish Defence League. This is the Scottish version of the English Defence League, a far right group which is making some headway in the present difficult times by blaming all our economic hardships on immigrants. The SDL's own advance publicity for the march described it as being staged by 'the Scottish Defence League (Borders branch)'. It turns out that I'm not the only person who's never heard of a Borders branch. Those protesters better informed than myself said that the Edinburgh members of the SDL have started to stage events in the Borders because Edinburgh is getting sick of them and they feel they will have more success out in the sticks. A number of Berwickers reacted with impressive speed to organise a counter demonstration which would prove them wrong, and about a hundred others turned out on the day. Although some protesters had come from Edinburgh or Newcastle the great majority were locals, and a surprising number of them were already known to me from other events more typical of the life of a middle-aged middle-class woman in a small town. The SDL lot, by contrast, had all come down together on the train from Edinburgh. Apparently members of the railway workers' union had refused to serve them in the buffet, which prompted a gleeful chorus of 'and they couldn't get a bevvy on the train' by some of our group. 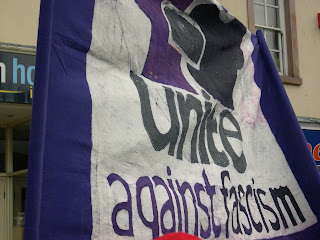 Anyone who's been following this blog will have realised by now that since Berwick is not actually in Scotland, it is not immediately obvious why the Scottish Defence League would want to defend it, or from whom. Furthermore, since the recently released figures from the last census show that the Berwick area is 97% White and 73% Christian (and most of the other 27% denied any religious affiliation), this is not an area that spontaneously feels it is being over-run by ethnic and religious minorities. The SDL and EDL may find it necessary to undertake a long programme of re-education before they can convince Borderers that immigration is the reason why this is one of the poorest areas of Britain. 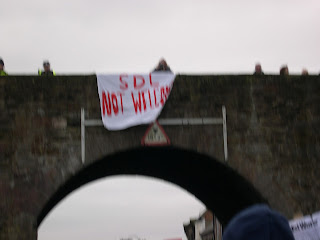 I don't usually post blurry photos on here, but participating in a march and taking decent photos of it are not easy to combine. This photo was taken while marching along at a brisk pace and holding a placard in one hand, so it's not that bad considering.

I would have liked to ask the SDL marchers whether the reclamation of Berwick for Scotland is one of their official policies, but none of us were allowed to get anywhere near them. The SDL and Berwick Unite Against Fascism were kept several hundred yards apart by the police and could only shout insults at each other across the barricades, in what has become a well worn ritual. The police have now got controlling these rival marches down to a fine art and a large number of extra personnel plus several horses had been brought into Berwick for the day. A helicopter seen circling overhead was assumed to be part of the police operation until the local paper revealed that it was carrying an entirely unrelated film crew. 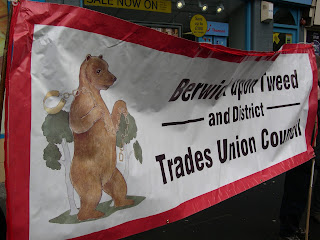 I was captivated by this fantastic picture on the banner of the Berwick TUC. One of the women carrying it told me that the drawing was commissioned from Cara Lockhart Smith, a noted illustrator of children's books who lives in the Borders. It shows the bear who is the symbol of Berwick breaking his chains, in an image which evokes not just the chained bears used to entertain the public in the past but the Communist Manifesto's reference to the workers of the world having 'nothing to lose but their chains'.  It is so good to see the world reminded that rural areas are anything but idyllic for the workers.