Cameron Hurls a Spanner into the Borders 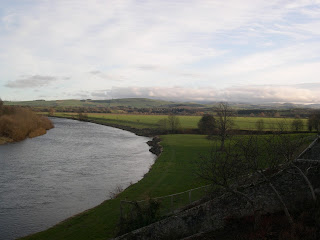 This is the river Tweed at Coldstream,with the Cheviot hills on the horizon. For those readers who have not seen my previous posts on this subject, I should explain that Coldstream is a small town about half an hour's drive west of Berwick, on the north bank of the Tweed and therefore in Scotland, because once you get west of Berwick the river returns to its natural role as the boundary between England and Scotland. The loop the border makes around Berwick is an artificial political device. At the risk of being accused of harping on this theme to a tedious degree, I will say once again: does it strike you as sensible or practical to make the river seen in this photo the frontier of the European Union?

In this blog I only touch upon national politics in so far as they affect the life of the Borders, but national politics has just taken a turn with the potential to impact on the life of the Borders profoundly. The Prime Minister of the United Kingdom, David Cameron, has announced that his government intends to hold a referendum on whether the UK should remain within the European Union or leave it. He did this because the UK Independence Party is taking too many votes from the Conservative party and he wants to pull the political rug from under UKIP's feet by stealing their main (arguably their only) policy. Mr Cameron has always given the impression that he finds it difficult to think about more than one problem at the same time. I am not sure that it even occurred to him to consider how this announcement might affect the other important referendum coming up in the next couple of years, the one that will ask, according to the revised wording just announced: Should Scotland be an independent country? Yes or No? But to those north of the border it was immediately obvious that he has thrown a giant spanner into the independence debate.

One of the key tactics of the unionist or anti-independence campaign has been to scaremonger about the consequences of independence for Scotland's membership of the E.U. They have said that it would lose its membership as part of the UK and have to re-apply for membership in its own right, which would take a while to be processed, leaving the Tweed in the meantime a vulnerable border of the E.U. The Prime Minister has now merrily jettisoned this useful argument by presenting us with the prospect that the whole of the UK might decide to leave the E.U. anyway. Although he says that he will personally campaign for the country to remain within the E.U., everybody knows there is a real possibility that the referendum will return a majority in favour of leaving, particularly in England. So where does that leave those Scots who wish to remain within the European Union? Are they to conclude that they had better vote for independence after all, so that they can retain their own membership regardless of what xenophobic Middle England decides to do? We now face the genuine possibility that England will leave the E.U. and an independent Scotland remain within it, which will make the Tweed a vulnerable border indefinitely.

Of course this might not be an entirely bad thing. It would certainly solve Berwick's economic problems, described a few posts back. Instead of being a declining town in the middle of nowhere, Berwick would become a magnet for every smuggler and people-trafficker on the continent, its hotels and restaurants newly prosperous on the custom of free-spending gangsters, its caravan parks packed to bursting with desperate migrants heading in ... I'm not sure which direction,  either south to London's imagined streets paved with gold or north to a more liberal immigration policy and a travel pass to the rest of western Europe.

Let us not get too carried away. A lot of unlikely things would have to happen before that scenario could come to pass. The most unlikely of all is that the Conservative party stays in power long enough to introduce the E.U. referendum. But the party's sheer disregard of the effect of its policies on Scotland is what is so telling. In the same issue in which it blew an editorial fuse over the Prime Minister's announcement of the E.U. referendum, The Scotsman newspaper reported that the most recent opinion polls taken before this bombshell showed support for independence down to 23%. But Mr Cameron has just demonstrated yet again that one should never under-estimate the ability of the Westminster government to alienate the Scots.
Posted by Elaine Housby