To The Immortal Memory 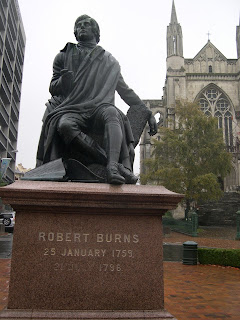 Today is the anniversary of the birth of Robert Burns, the national poet of Scotland, celebrated wherever a few Scots gather together. Part of the ritual which has developed to mark Burns Night is the toast 'to the immortal memory' of the great man, hence the title of this post. Burns Night suppers are a very big thing in Scotland, and since Berwick is known in some quarters as 'occupied Scotland', it's a pretty big thing here too. You can tell that from the notice in the photo below - even if the local St Andrews Club is inexplicably holding its supper on the wrong day. Maybe all the members are attending other suppers north of the border tonight, and hold a duplicate celebration on Monday to bemoan their occupied state.

All of the local butchers have posters in their windows urging us to buy their produce for our Burns Night celebration, particularly their haggis. I'm fond of haggis myself and quite often buy it at the chip shop. I hope that hasn't shattered too many illusions among my readers. Haggis is not some rare and exotic dish only seen on 25th January, it is routinely served with baked potatoes in cafes and in battered form by chip shops in Scotland and some way south of the border. Though I'm sure that Scottish foodies would wince at the suggestion that this national dish is most commonly eaten battered with chips. 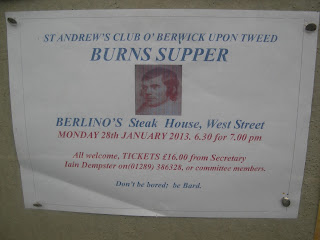 Now for a surprise. The photo above of an imposing monument to Burns was not taken anywhere in Scotland or even in the Debatable Land - it was taken in Dunedin in New Zealand. This city was founded by Scottish emigrants and in its architecture, street names and cultural traditions is still extremely Scottish. The name Dunedin was taken from an old name for Edinburgh. In a more correct Gaelic spelling this is still used as the name for Edinburgh in the Gaelic versions of official notices in Scotland. I have also seen an even more imposing monument to Burns in a park in Auckland. The early Scottish settlers in New Zealand seem to have revered Burns not just as a great poet and part of their cultural heritage but because of his then radical political views. He expressed a spirit of egalitarianism and democracy which many emigrants hoped would be the norm in their new land, away from the oppressive system of land ownership in Scotland.

At the opening of the Scottish Parliament in 1999, an emotional occasion marking the final success of decades of campaigning for devolved government, a musical setting of Burns' most famous poem, Is There, For Honest Poverty, was sung.  That's the one that says 'the rank is but the guinea's stamp' and 'a man's a man for a' that', and makes pointed remarks about how having some aristocratic title in front of his name doesn't stop a man being a fool. Our Rabbie was known to sympathise with the French revolutionaries. I found the inclusion of his endorsement of liberty, equality and fraternity moving and appropriate. Believe it or not however, some particularly curmudgeonly elements of the English press thought that it was scandalous to give such prominence to a hymn to the meaninglessness of worldly ranks and titles in a ceremony presided over by Her Majesty the Queen. That's a pretty good example of the kind of thing that's making the Scots so fed up with the English.
Posted by Elaine Housby