'The roofs shall fade before it, the house beams shall fall' 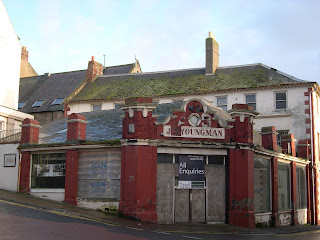 Although I promise 'at least one nice photo' with every post, this blog has never been intended to be a touristy sort of production with pretty pictures and promotional puff about what a great place this is. I try to write about things that are genuinely interesting about this area rather than what some taxpayer funded quango has officially decreed will attract visitors. So here is a picture of Berwick's most notorious 'grot spot'. This building has been derelict for years. That clock stopped a very long time ago. It is a cause of furious tut-tutting and head-shaking among the activists of the Civic Society and other heritage preservation enthusiasts. Every now and then rumours circulate about who owns it and what they're planning to do with it, but the basic reality seems to be the same as with so many buildings now, the owners are not prepared to sell the property for what it would fetch in the present market but can't afford to renovate it either. But of course, while markets may cease to function, nature never does. 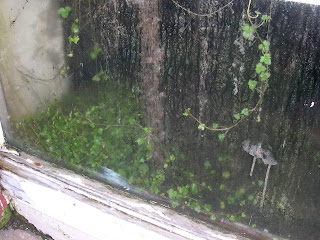 Before I even moved to Berwick I discovered this site on a day trip and was fascinated by the fact that there was plants growing INSIDE the building. I had never seen this phenomenon anywhere else. I still haven't. I've since learned that it's because the floor was dug up in the course of some sort of investigation of the condition of the ground, thus liberating an abundance of dormant weed seeds. And since the building is now far from rain-proof the plant life continues to grow and flourish. There is an amazing stand of ferns in one corner that would not look out of place in a New Zealand botanical garden. Sadly the windows round that side are so dirty that I can't get a photo.

As a child I fell in love with a poem in The Jungle Books which describes an abandoned village being reclaimed by the jungle. This may be why my first reaction to the sight of a building being steadily overcome by plants is always to marvel at the way nature can reclaim all the works of man, rather than to think, 'we really must get a section something-or-other order to force the owner to do it up'. In the final analysis, does it really matter if we don't preserve every single building? After all, the only reason Berwick still has so many fine 18th century buildings is that its fortunes declined drastically after the end of the Napoleonic wars and it spent the 19th century being too poor to knock them down and build chunks of curclicued Gothic which we now don't like as much as the Georgian stuff. In the 1960s it was still too poor to knock them down and build concrete shopping malls as so many other towns did then. Isn't there something to be said for a slow aesthetically appealing decay?