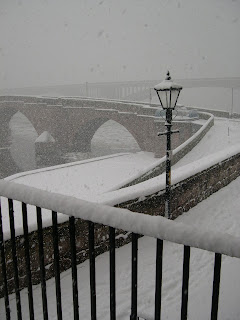 Greetings from a snowy Berwick. After a few bitterly cold days we woke this morning to find the white flakes falling steadily and the ground well covered.  I took these photos a couple of winters ago but the view was just the same today. In the snow this street lamp on Quay Walls looks just like the one in Narnia, if that's not too romantic a thought.

I had the luxury of being able to drop the blind with a groan and snuggle back under my 13.5 tog duvet, because I'm one of those people the government has been denouncing who still have their curtains closed when their hard-working, striving neighbours are heading to work. Though, as already indicated, I have quite smart wooden blinds rather than curtains, and I prefer to describe my lifestyle as 'working from home' rather than 'shirking'. Okay, it's a fine line. There are a great many people in this area who are much harder working than I am, but are blocked at every attempt to access employment and economic opportunities. 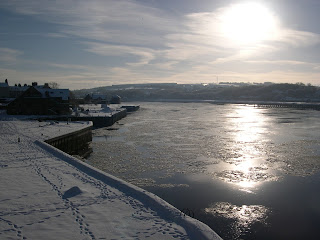 Last week I attended an excellent talk by John Lord of ARCH, a regeneration agency run by Northumberland County Council, on the economic problems and future prospects of Berwick. He delighted me by saying that anyone who thinks the decline in trade at the traditional high street shops is entirely due to the fact that parking in the town centre is not free, is, and I quote, 'barking mad'. I couldn't agree more. I have this odd notion that the shops would get more trade if they sold stuff that people want to buy, but I don't dare to express such radical thoughts in public.

Mr Lord gave a brutally honest summary of the factors which make Berwick 'one of the more acute cases' with which he has dealt. It no longer has any clear economic purpose, now that the military have left, the shipyard has closed down and the fishing industry is a fraction of its former self. It's a long way from anywhere. The population is ageing and young people don't want to stay. On the plus side, it's not as badly off as Margate, which he has also consulted on. Berwick has a beautiful environment and a fascinating history and it should capitalise on those. I try to do my bit for that with this blog.

During the Q&A I asked whether any purely Northumberland based agency could succeed in regenerating the town, when so much of its economy is dependent on the Scottish end of its hinterland, and commented that there seems to be almost a conspiracy of denial over the extent to which Berwick's problems are complicated by its anomalous position in relation to the border. Presumably because his employers at Northumberland County Council would not condone any suggestion that being in Northumberland could ever be less than an unqualified blessing, Mr Lord made non-committal responses to this.
Posted by Elaine Housby